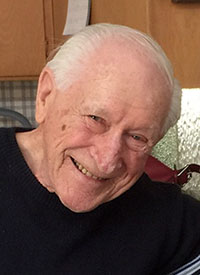 Known as Bob to friends and family, he was born on Feb. 27, 1929, in Austin to Arthur and Mary (Jacob) Meyer. Bob graduated from Austin High School in 1947. He served in the U.S. Marine Corps from September 1947 until his honorable discharge in October 1951.

Bob enjoyed a long career in the aerospace industry with Rockwell International/Boeing. His job took him many places throughout the United States and afforded him the opportunity to manage procurement for projects such as the B1 Bomber, Apollo Space Program, and the Space Shuttle Program. Following his retirement in 1984, Bob returned home to Austin, where he met and married Joan E. (DeSart) Block in 1985. They enjoyed 29 years of marriage with many trips together visiting friends and relatives around the country as well as some mystery trips to various destinations. He and Joan were active in the Austin community, where they volunteered their time with the Hospital Auxiliary and the renovations of the First United Methodist Church and Historic Paramount Theatre. They were active in the United Methodist Church until Joan’s passing in 2014.  Bob – lovingly known as the original “MacGyver” – enjoyed working in the yard, “tinkering,” and was always modifying and inventing new things. He was liked by all he met and loved by all who knew him.

A memorial service will be held at 2 p.m. on Saturday, Nov. 2, 2019, at Clasen-Jordan Mortuary with the Rev. Shari Mason officiating. Visitation will be held for one hour prior to the service on Saturday at the funeral home. Interment will be at Oakwood Cemetery with Olaf B. Damm VFW Post 1216 and Austin American Legion Post 91 in charge of military rites. In lieu of flowers, memorials in Bob’s memory may be directed to Friends of the Jay C. Hormel Nature Center (www.hormelnaturecenter.org).