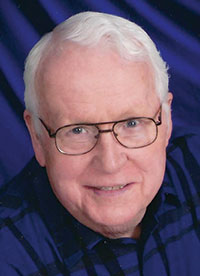 He was born on Jan. 25, 1939, in Leonard, Minnesota, the son of Myron and Levina (Larson) Hagen. Richard was married to Rose Gardner for 24 years, until she lost her battle with cancer.

He later married Avis Aamodt in 1989 and they have been married for 30 years. How she actually put up with all his children, we’ll never know. They enjoyed several trips out West to go ocean fishing and, as a side note, they visited family.

Richard was a veteran of the U.S. Navy and the U.S. Army and spent most of his career in law enforcement after trying his hand at other careers throughout his life. He was an avid sportsman with a special love of bass fishing. We know for sure he caught at least two keepers.

He enjoyed spending time with his children, grandchildren and great-grandchildren. He enjoyed torturing his kids by making them watch the TV show “Hee Haw” when visiting. He especially liked taking their money playing poker. He had a great sense of humor and needed it to survive life with his siblings and five kids.

Richard was an active member of Grace Free Lutheran Church and a member of the American Legion and VFW. He will always be remembered as generous, kind and supportive with everyone.

He is survived by his wife, Avis; his five children, Keith (Epol) Hagen, Val (Cliff) Martin, Kevin (Jody) Hagen, Kelly (Lonnie) Hagen and Vince (Marie) Marianiello; nine grandchildren; 13 great-grandchildren; his brothers, Lowell, Sherman, David and Gordon; his sister, Carole Davison; and many other living relatives and friends. He was preceded in death by his parents, Myron and Levina Hagen; two brothers, Kenneth and Jerry; sister, Violet Jean; and his first wife, Rose.

Memorial services were held on Monday, Oct. 7, 2019, at Grace Free Lutheran Church in Bagley. Visitation was on Sunday, Oct. 6, 2019, at the Cease Family Funeral Home and prior to the services on Monday at the church. The Cease Family Funeral Home of Bagley assisted the family with arrangements. Messages of condolence may be sent to ceasefuneralhome.com.

Eugene Joseph Leif, 87, of Austin, Minnesota, passed away peacefully with his loving family at his side on Friday, Sept.... read more