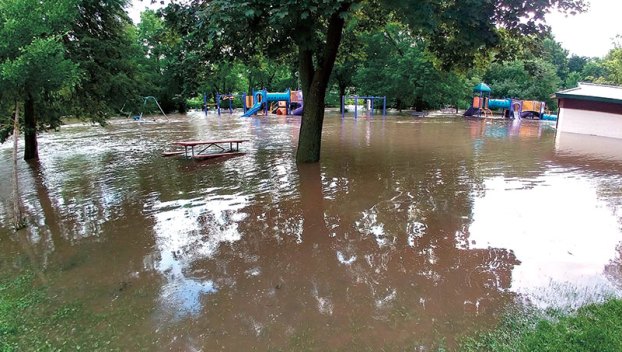 Flood waters from Cascade Creek fill Kutzky Park near downtown Rochester, Minn., on July 6, 2019. Earlier this month, the city blew past its previous yearly precipitation record — and it’s rained more since then and is expected to rain even more this week. Courtesy of Rochester Fire Department file

Ryan Ostreng just hopes it will dry out, someday.

A captain with the Rochester Fire Department, Ostreng has worked with the city’s emergency management office a lot this year on water problems.

In June, it rained so hard all at once that city officials nearly had to evacuate a senior living facility because of flooding. Streets and basements also have flooded.

“So, this stuff is going to feed into our emergency management program when we start to take a look at what we need to do to beef up plans,” Ostreng said.

Rochester is Minnesota’s epicenter when it comes to wet weather this year. Earlier this month, the city blew past its previous yearly precipitation record — and it’s rained since then and is expected to rain even more this week. So far this year, Rochester is at around 45 inches.

“60.21 is what we had at Harmony last year. Caledonia had 56 inches of rain,” said assistant state climatologist Pete Boulay. He added that it’s been a wet decade.

Maps from the Minnesota Department of Natural Resources’ climatology office show large swaths where this year’s rainfall totals are higher than 99 percent of the other years recorded.

The National Weather Service says the Twin Cities just broke the record for total precipitation for the period that runs from the start of last October to the end of September.

Minnesota’s climate has changed and continues to change. Wetter conditions are expected to come with it. Rains are more intense — an inch or more in a short amount of time is getting more common.

“You don’t just get these quarter-inch or half-inch rain events, you get an inch, you get a 2-inch,” said Tiffany Schaufler, project and land manager for the Minnehaha Creek Watershed District.

Schaufler said she has about 30 weather tabs open on her computer, drawing jokes from coworkers. But part of her job is to monitor rainfall. She needs to figure out how much water will end up in Lake Minnetonka so that the agency can decide how much water needs to leave Minnetonka through the Gray’s Bay Dam. Water leaving the lake ends up in Minnehaha Creek, Minnehaha Falls and sometimes people’s basements.

Since 2013, Schaufler said, “there’s just been no reprieve and everything’s just at capacity or above capacity.”

Cities such as Plymouth, St. Louis Park, Shorewood and Deephaven, Minn., have taken out permits to pump water from wetlands or ponds into storm sewers or lakes, she said.

Homeowners in parts of south Minneapolis have been dealing with broken sewer pipes and flooded basements, and experts from multiple government agencies are putting their heads together to figure out long-term solutions.

Farmers have experienced a series of wet years.

“In some of these months, we’re getting a month’s worth of rain in a week. It makes life for farmers complicated,” said Jeff Strock, a soil scientist for the University of Minnesota’s Southwest Research and Outreach Center in Lamberton, Minn.

Many Minnesota farmers planted crops late because of a wet spring. That can hurt yields. And now the question is how soon they can get back into the fields to harvest. They’ll hope for a dry spell — that way they don’t have to spend as much money on drying out the grains.

Strock points out a delayed harvest has other effects we might not be thinking about.

“As a sportsman, the pheasant opener is going to be coming up soon, and with all the grain still in the field, it makes it a little more challenging to chase those pheasants around,” he said. “They’re going to spend time in the bean fields and in the corn fields.”

A wet fall is one factor hydrologists look at when predicting the risk of spring flooding. The next factor to watch is how snowy the coming winter will be.

Just when the area might have found a little break from the wet season, Mower County will be under a... read more