Bloomng Prairie’s Zach Weber takes off on a route in practice in Blooming Prairie Wednesday. Weber and the Awesome the Blossoms have dedicated their season to BP grad Anthony Nelson, who passed away this summer. Rocky Hulne/sports@austindailyherald.com

Playing for a fallen friend: BP has dedicated its season to a grad who passed away this summer

BLOOMING PRAIRIE — Before the Awesome Blossoms take the field on Friday nights, senior Zach Weber takes a moment to reflect on a friend who meant the world to him.

As the Awesome Blossoms keep up their tradition of reciting a pre-game prayer, Weber thinks about Anthony Nelson, a former BP athlete who passed away in a car crash at the age of 22 this past fall.

“He’s on my mind every day,” Weber said. “ I have a plaque of him in my room just sitting there and when we do the Lord’s prayer in pregame, he’s always in my heart. It’s a huge motivation. We want to win a championship for him.”

Nelson was a standout defensive back and wide receiver for the Awesome Blossoms, and he also excelled on the basketball court for BP. Nelson had a giant influence on the current BP seniors, who were eighth-graders when Nelson last played for the Blossoms, as he went out of his way to help out younger players.

“Anthony had time for everybody,” BP head coach Chad Gimbel said. “He loved to spend time with underclassmen and he was a leader on and off the field. He was a mentor and he liked to take kids under his wing and show them the right way to do things. He left that with these kids and he left that with this football program.” 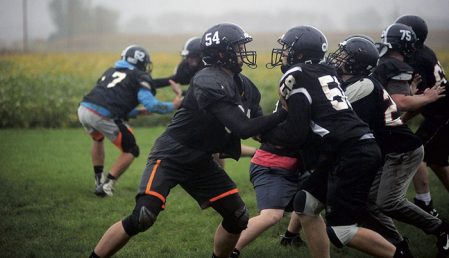 “We went on bike rides and played a stupid game called ‘Pokémon Go,’” Weber said. “We would just ride our bikes around town and have fun. Summer came and we would have the weight room program, where (Anthony) would always push us to go harder. He made me a better person.”

Weber was working at the BP pool this past July when he learned about Nelson’s accident. He was completely stunned.

“I didn’t believe it at first,” Weber said. “I couldn’t work the rest of the day and I had to go home. It definitely shocked me.”

“We kind of had a family circle,” Kaden said. “I was really close to (Anthony). We want to dedicate our season to him and work hard, because we know that he’s watching us. He was a great leader and he was a person that you wanted to be around. He was always positive and he always wanted to help people out.”

BP (5-0 overall) advanced to the Minnesota Class A State Football Tournament semifinals last season, which was its first trip to state since Nelson led BP to state in 2015. BP has never won a state football title.

The Awesome Blossoms are currently ranked No. 2 in Class A and they will host Kenyon-Wanamingo at 7 p.m. Friday.

GUIDING THE POINT OF THE ATTACK

Blooming Prairie senior Kaden Thomas is happiest when he’s playing point guard for the Awesome Blossoms basketball team, but his side gig as the BP quarterback isn’t too shabby either.

Thomas was moved to quarterback last fall after Seth Peterson, who has now graduated, was injured right before the postseason. Thomas helped lead BP to the state semifinals last year and he’s feeling even more comfortable at the helm this season.

“It’s been a lot more exciting, knowing what we’ve got around me,” Thomas said. “We’ve got a lot of good playmakers and a lot of good linemen who help make the game fun. A lot of things are coming easier with all of our guys having another year of experience.” 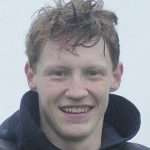 BP head coach Chad Gimbel said that Thomas’s background in basketball is a key attribute towards his ability to run BP’s fast-paced offense, which is averaging 46.8 points per game.

“He has confidence, he knows the schemes and he’s so smart that he sees what the defense is doing,” Gimbel said. “Being a point guard in basketball, he’s able to see those windows and he’s able to anticipate. That’s such a huge thing at that quarterback position. He kind of knows what’s happening before  the defense does.”

Thomas, who played AAU basketball over the past few summers, said he’s glad he stuck with playing quarterback, even if it isn’t his main sport.

“It’s a lot different than basketball. Football is much more aggressive and there’s a lot more guys on the field,” Thomas said. “Playing quarterback helps me a lot with basketball.”