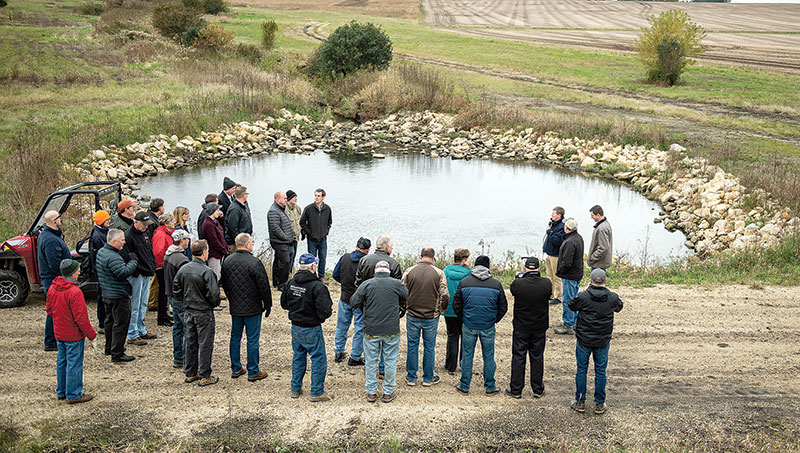 At about the halfway point, those who have had a hand in phase one of the Cedar River Watershed District’s Capital Improvement Projects got a first-hand look Wednesday at progress at the Dobbins 1 site.

The project is an attempt to corral Dobbins Creek north of Austin, which in turn will limit flooding, improve water quality and improve habitat.

“Everybody on site today has been a partner,” Justin Hansen, CRWD Administrator, told the group gathered at the site. “I think the unique possibilities and unique partnerships are powerful in this community.”

The work done at Dobbins 1, along with work currently underway just west of the site, is an attempt to curb stormwater flow by 10 percent at Austin’s Cedar River-Dobbins Creek confluence.

To do that, an earthen berm is constructed and a controlled drainage system is utilized. In the past, that stormwater rushed toward Austin unimpeded. This kind of event has contributed to flooding in Austin, including the 2004 record flood event. 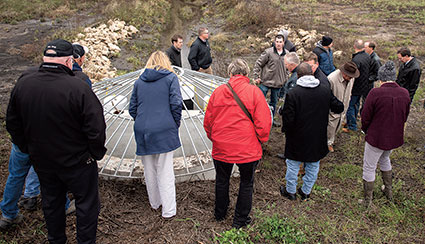 The water will now gather behind the berm, allowing for a controlled release down stream. On the other side of the berm is a small retention pond, which is also designed to allow water to gradually flow downstream rather than rushing downstream.

For this plan to work, however, the CRWD needed to work with landowners. Twenty-six landowners signed off on the project.

“Most have been very supportive,” said Project Manager Cody Fox. “Most signed right away.”

This partnership becomes much more important considering the land that this project needs to work is very specific.

“There are only so many options,” Fox said. “We need the right topography so it’s important to work with landowners.”

The total dollar amount for this part of project comes to $5.6 million dollars, with the second phase, which will soon be getting underway, costing $3.4 million, a total of $9 million with the two projects together. Funding for the project has come from the CRWD, The Hormel Foundation, the state’s Clean Water Fund and state bonding money.