Ozro H. Brown, 93, passed away peacefully on Thursday, Oct. 10, 2019, at home. He had been experiencing failing health since leaving the family farm and moving to Austin, Minnesota, in March 2019. 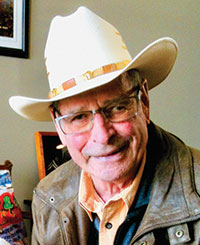 The oldest of five children, Ozro Hubert Brown, was born on Nov. 9, 1925, to Ozro F. and Marion C. (Hanson) Brown in Scobey, Montana, in a homestead shack built by his grandfather. In 1930, the family relocated to the Brown family homestead in Lyle, Minnesota. He enlisted in the U.S. Army upon his high school graduation and served his country in World War II from 1944 until his honorable discharge in 1946. He was a member of the Lyle American Legion for 70 years. After his service, he went to work for the Buechner family at Tomlinson Lumber. Ozie married Mavis Anderson on June 19, 1949, in Sargeant, Minnesota, and they were blessed with a daughter, Cheryl, in 1950 and a son, O. Charles, in 1951. Around 1965, Ozie began a career with United Building Centers, where he worked until his retirement in 1988. He was manager of the Austin store for several years and then was purchase manager in Winona, Minnesota. Ozie was an avid outdoorsman and enjoyed hunting and fishing. For the last several years, he especially enjoyed an annual trip with family to Brainerd, Minnesota, for the “Brown family” fishing week.  He also loved working on the farm and for several years raised Black Angus Cattle. He always loved returning to Montana to visit many relatives who still live there. It was an annual trip in later years After Mavis passed away in 1997, Ozie started going to Bibleville in Alamo, Texas. He was involved in several mission activities there. In 2003, he met a special lady in Bibleville and on June 8, 2003, Ozie married Jan Seastrom in Austin. Together they spent their winters in Bibleville, where they continued to participate in mission activities. Ozie received Christ as his Savior at a young age and was baptized at First Baptist Church in Austin. He was an active member at First, then Grace Baptist, until his death. He served as deacon, trustee, Sunday school teacher and volunteer for many years.

Funeral services will be held at 11 a.m. on Monday, Oct. 14, 2019, at Grace Baptist Church with Pastors Dan Mielke and Devin Larsen officiating. Visitation will be from 4-6 p.m. on Sunday, Oct. 13, 2019, at Clasen-Jordan Mortuary and continue for one hour before the service on Monday at the church. Interment will be in Rose Creek Enterprise Cemetery with Lyle American Legion Post 105 in charge of military rites.