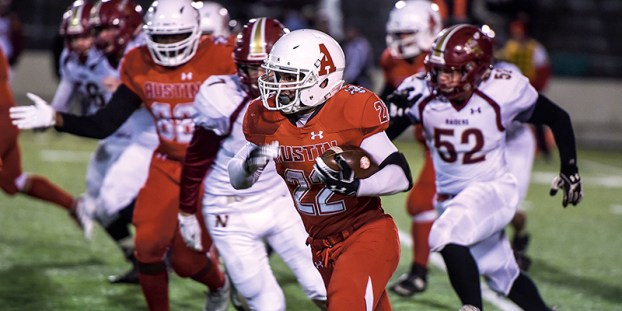 Austin’s Teren Olvera breaks off a 65 yard run on the first play from scrimmage against Northfield Friday at Art Hass Stadium. Eric Johnson/photodesk@austindailyherald.com

The Austin football team looked like it was ready for a breakout performance early on, but its momentum quickly vanished as it lost its fifth straight game losing to  Northfield 24-7 in Art Hass Stadium Friday night.

The Packers (2-5 overall) started the game strong as Teren Olvera burst down the sideline for a 65-yard run to the Northifeld 13-yard line. But that drive stalled and led to a missed 25-yard field goal by Joe Ewing. Austin had just 53 yards of offense the rest of the night. 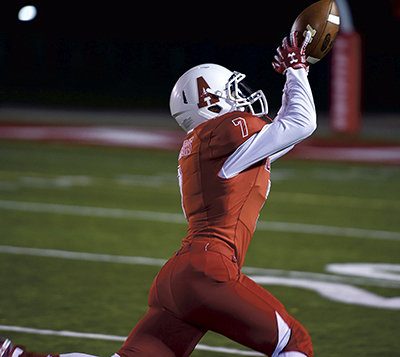 Austin’s Rigo Prado reaches out for the ball after a blocked punt against Northfield Friday night at Art Hass Stadium. Eric Johnson/photodesk@austindailyherald.com

“You open the first play with a big run and it looked promising,” Austin head coach Ed Schmitt said. “When we’re doing the right assignments, it goes real well. When we have one or two guys that go the wrong way, then we have problems. We’ve still got work to do and we’ll get ready for Albert Lea.”

Austin’s lone score came when Rigo Prado picked up a blocked punt and ran it back 28-yards for a TD that put Austin up 7-6 with 1:59 left in the first half. The Raiders (1-6 overall) had a quick answer as Gavin Rataj hit Daniel Monaghan for a 43-yard scoring strike to make it 14-7 Northfield with 31 seconds left in the first half.

The Raiders put the game away when Rataj found Nick Touchette for a four-yard TD with 11:47 left in the game. That score was set up by a 35-yard run by Monaghan on a fake punt on fourth 13.

Austin will close out its regular season when it hosts Albert Lea at 7 p.m Wednesday. 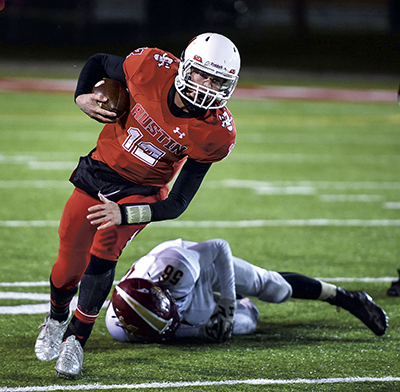 Lyle-Pacelli comes up short in an upset bid

The Lyle-Pacelli football team was edged out by a score when it lost to Spring Grove (5-2 overall) 20-14 in... read more