Denied being alone with alleged victim 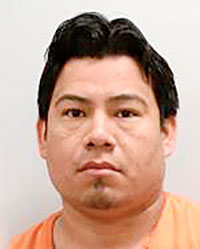 According to the court complaint, police were alerted on Oct. 7 about an allegation of criminal sexual conduct reported at an Austin school. The alleged victim, a 12-year-old girl, had disclosed she had been inappropriately touched by Ortiz, who was known to her.

A detective and Mower County Child Protective Services worker interviewed the victim, who was reluctant to speak because she was concerned she would not be believed and that Ortiz would call her “a liar.” She said the first time Ortiz touched her inappropriately happened three months earlier in a bathroom, and that another incident had occurred this past weekend. In that incident, she said she got away from Ortiz and locked herself in a room.

The victim indicated Ortiz had not touched her under her clothes.

A relative of the victim indicated to police the victim was having behavioral problems and may have “misinterpreted” Ortiz’s actions, but said she was unsure if the victim would fabricate the bathroom incident.

A detective spoke to Ortiz, who denied touching the victim, saying he was never alone with her.

Ortiz will appear in court again on Oct. 21.

Celebrating National 4-H Week, the Mower County 4-H shared some information with the county board regarding its programming and past... read more