A man who pleaded guilty to a November 2018 robbery at Ankeny’s Mini Mart No. 1 received additional charges on Thursday.

Jeremy Simon Garcia, 21, of Austin was charged with felony escape from custody in Mower County District Court. He pleaded not guilty to the charge. 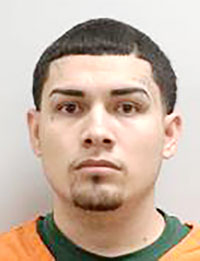 According to the court complaint, an officer was dispatched on May 29 to a residence in the 2100 block of Fifth Avenue Northeast on a report of found property. A woman had located a GPS monitor in front of her residence. The officer was advised the monitor was supposed to be worn by Garcia, who was awaiting sentencing for felony first-degree aggravated robbery-dangerous weapon.

An agent with Mower County Correctional Services had been informed by Midwest Monitoring and Surveillance that Garcia had likely cut off his GPS monitor the previous night.

The device’s serial number matched that of the monitor Garcia had been wearing.

Garcia was also sentenced to 15 months in the Minnesota Correctional Facility in St. Cloud, to be served concurrently with another sentence, on Thursday for violating his probation from a 2017 conviction for felony failure to appear on a felony charge. Judge Christa M. Daily issued the sentence.

A review of Garcia’s criminal history shows prior convictions for theft and failure to appear on felony charges in Minnesota, as well as a conviction for “bail jumping” in Texas. He is currently serving a 108-month prison sentence for a felony first-degree aggravated robbery conviction out of Olmsted County. He is still awaiting sentencing for felony first-degree aggravated robbery-dangerous weapon-in connection to the November 2018 robbery of Ankeny’s Mini Mart No. 1.

Trump aims to turn impeachment probe into a campaign asset

MINNEAPOLIS — President Donald Trump was defiant in the face of an impeachment probe as he sought to convert the... read more