An Austin man taken into police custody after a Friday night domestic situation made his first appearance on Monday in Mower County District Court.

Emilio Garcia Gutierrez, 42, of Austin has been charged with felony second-degree assault-dangerous weapon. 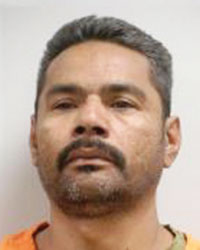 According to Austin Police Chief David McKichan, police responded to a domestic call at about 11:45 p.m. on Friday in the 1800 block of Third Street Northeast. The victim, an 18-year-old male, told police that an argument had occurred and that his father, Gutierrez, had brandished a knife and cut him on his cheek.

Police observed a deep laceration on the victim’s cheek that was about two inches long, McKichan said.

A juvenile male at the residence witnessed the incident and told police he tried to stop the attack.

Gutierrez was arrested without incident.

Gutierrez will appear in court again on Oct. 28.

Woman pleads not guilty to biting man on the cheek; Was intoxicated at time of arrest

Robyn Kay Halverson, 63, of Austin pleaded not guilty to felony domestic assault during an initial appearance on Monday in... read more