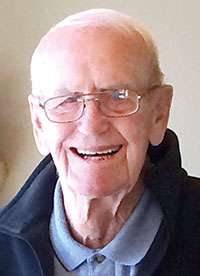 His greatest joys in life were being a husband, father, and grandfather. Lars will always be remembered as a proud Marine, a true outdoorsman and a very successful deer hunter.  Sharing a cup of coffee, cookies and conversation with a good friend always made his day.

Leonard was born on July 5, 1929, in Austin, Minnesota, to Andrew and Josephine (Dalquist) Johnson.  At a young age he was given the nickname “Lars” which carried through his entire life. He graduated from Austin High School in 1947. While in high school, friend and teammate John Beckel played on the same high school football team winning 27 consecutive games.

Like his father and uncles, Lars began his working career at the Hormel Meat Packing plant in Austin. He started working for Hormel in high school and retired in 1983 at the age of 55. How fortunate he was to enjoy retirement for nearly 35 years.

In 1950, Lars joined the US Marine Corp and fought in the Korean War. The discipline and patriotism he learned in the Marines never left him, as friends and family will attest.

Lars and Elaine Johnson were married Aug. 4, 1957, at St Olaf Lutheran Church making their home in Austin.  Shelley was born in 1959, and Steven was born in 1964. After their move to Baudette, Minnesota, in 1989, his next career was working as ‘vice president’ of Gold Star Bait, a job he so enjoyed and became well known in the resort community.  Lars and Elaine’s best memories while living in Baudette were because of the friendship extended to them from Steve and Joanne at Ballard’s Resort, helping care for Jessie and Keith, deer hunting with Jeff, and holidays with the entire Ballard family.

The most valuable gift Lars received was the gift of friends — Louie, John and Lars were lifelong forever friends like no others.  They always had a reason to celebrate and a reason to be together.

Our family would like to thank the Lakewood staff for making the Arc and Care Center a special place for Lars to call home the past two years.  Thank you for your prayers, love and support of Lars.  In lieu of flowers, memorials are suggested to the Lakewood Regional Healthcare Foundation in Baudette or Wabanica Lutheran Church.