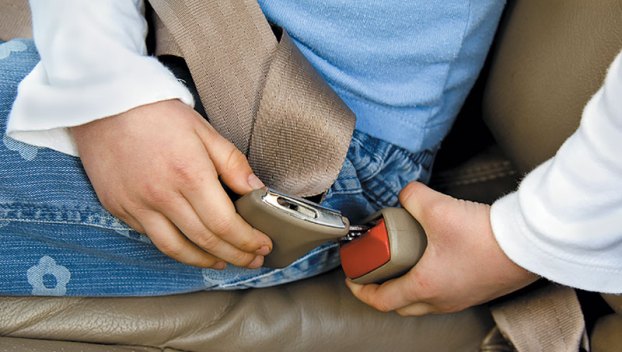 Minnesota law states that drivers and passengers in all seating positions must be buckled up or seated in the correct child safety seat. Metro Image

More than 300 law enforcement agencies statewide participated in the Click It or Ticket campaign. The Minnesota Department of Public Safety Office of Traffic Safety coordinated the enhanced enforcement and education efforts and provided federal funds from the National Highway Traffic Safety Administration for extra patrols.

Minnesota law states that drivers and passengers in all seating positions must be buckled up or seated in the correct child safety seat. Officers will stop and ticket unbelted drivers or passengers. Seat belts must be worn correctly: low and snug across the hips, and shoulder straps should never be tucked under an arm or behind the back.

In Minnesota, all children must be in a child restraint until they are 4 feet 9 inches tall, or at least age 8, whichever comes first. The American Academy of Pediatrics recommends that all infants and toddlers should ride in a rear-facing car seat until they have reached the height and weight limits allowed by the car seat manufacturer.

School-age children who have reached the height and weight limits of the forward-facing seat should sit on a booster seat. The booster must be used with a lap and shoulder belt. Children over 8 years old or who have reached 4 feet, 9 inches tall should wear a seat belt. It is recommended to keep a child in a booster seat based on their size rather than their age.

Your child is ready for an adult seat belt when they can sit with their back against the vehicle seat, knees bent comfortably and completely over the vehicle seat edge without slouching, and feet touching the floor. It is recommended that children under the age of 13 ride in the back seat to prevent airbag-related injuries or death.

Although the general public will not be able to hunt pheasant with Gov. Tim Walz during this weekend’s Governor’s Pheasant... read more