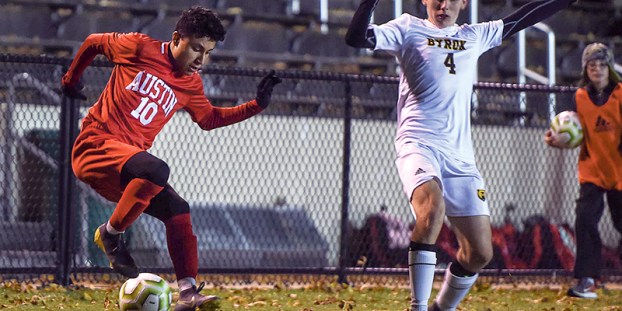 Austin’s Julio Hernandez Espindola settles the ball along the sidelines during the first half against Byron Tuesday night in the Section 1A semifinals at Art Hass Stadium. Eric Johnson/photodesk@austindailyherald.com

The Austin boys soccer team clamped down on defense and waited for its offense to ignite in the second half as it beat No. 4 Byron 8-1 in the Section 1A Tournament semifinal in Art Hass Stadium Tuesday.

Byron’s only goal came on penalty kick by Adam Krakora to make it a 6-1 game with 12:58 left. The Bears (12-5 overall) were able to muster just one shot on goal throughout the game.

Byron, which had scored at least three goals in a game nine times this season, is now the 16th opponent that the Packers have held to a goal or less this season. 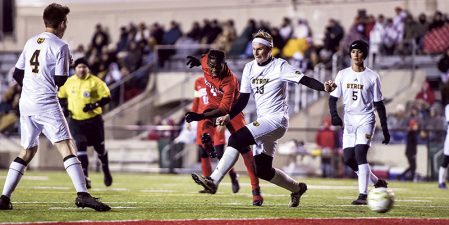 Austin’s Henry Tolbert fires off a shot against Byron in the first half Tuesday night in the Section 1A semifinals at Art Hass Stadium. Eric Johnson/photodesk@austindailyherald.com

“It takes a lot of communication with everybody, especially with the left and right mids who have to come back and help us out,” Austin senior defenseman Igor Blinklow said. “(Byron) was physical and they used the through ball a lot. We shut them down.”

Lucas Evenson put the Packers in control when he scored two goals in a one-minute spurt to make it 4-0 Austin just six minutes into the second half. Evenson, a senior who now has four career goals, was happy to hit his stride in his final game at Art Hass. 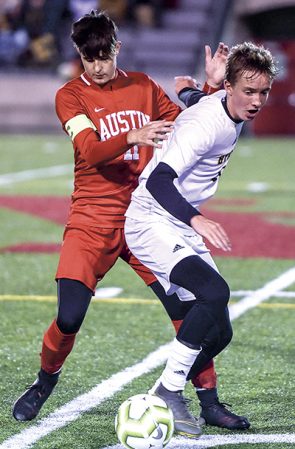 Austin’s Dylan Hanegraaf, left, battles with Byron’s Cameron Schmit during the first half Tuesday night in the Section 1A semifinals at Art Hass Stadium. Eric Johnson/photodesk@austindailyherald.com

“Those goals meant a lot to me,” Evenson said. “We pressured the ball a lot and we didn’t give up. You’ve got to constantly be pushing for that next goal and you can’t slow down. You’ve got to keep pressure on them and keep them on their toes.”

Elisha Simerson had pin-point pass on Evenson’s second goal and Simerson also found the net to make it 6-0 with 14:53 left in the game.

“We were very pumped for this one,” Simerson said. “We saw that these guys beat Lourdes and we really want Lourdes. We knew this would be a tough game, but we were pumped to play our last home game here.” 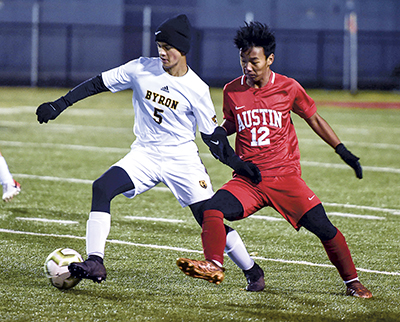 Jose Vallardes, Poe Res and Pray Reh each scored one goal in the win.

Austin will now play in its fifth straight Section 1A title game when it will take on No. 3 Rochester Lourdes at 5 p.m. at Paul Giel Field in Winona on Thursday.

Austin and Rochester Lourdes will be meeting in the Section 1A title game for the eighth time in the last 11 years.

The Packers have won three of those meetings, including the last two.

“We’ll come out tomorrow and we’ll want to get a good practice in,” Austin head coach Jens Levisen said. “I’m sure a lot of the guys have been eyeing that game for awhile, as much as tell them to focus on the game at hand, I’m sure that’s the game that they’ve been thinking about. We’ll just come out and play our game. That’s going to be it.” 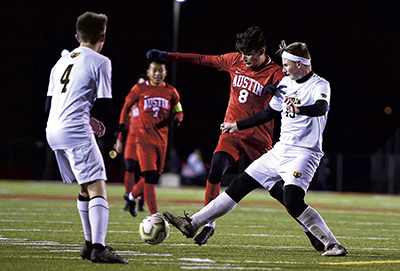 Austin’s Andres Garcia battles in a crowd during the first half against Byron Tuesday night in the Section 1A semifinals at Art Hass Stadium. Eric Johnson/photodesk@austindailyherald.com

The public is invited to attend an information open house on Tuesday, Oct. 22, in Austin to learn about an... read more