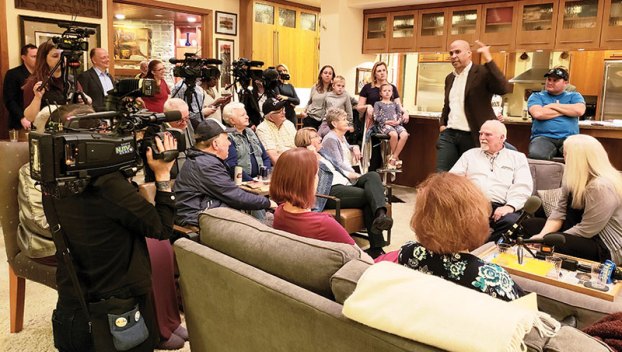 ‘Democracy is not a spectator sport,’ Sen. Cory Booker told an audience on Sunday. ‘We all have an obligation to make change; nothing will change unless we do.’ Photos by Deb Nicklay/newsroom@austindailyherald.com

America, he said, has far greater things to worry about, not the least of which is an erosion of what Booker calls “civic grace.”

“Do you know what the theme of this election is to me? It’s not about trying to out-trump Trump,” he told a gathering at a home near Lyle Sunday night. “We’re not going to beat Donald Trump using his tactics, on his turf, on his terms. The challenge is what Dr. Martin Luther King said: ‘the ultimate tragedy is not the oppression and cruelty by the bad people but the silence over that by the good people.’

“Democracy is not a spectator sport. We all have an obligation to make change; nothing will change unless we do.”

Booker, 50, speaking to a group of about 50 at the Kurt Meyer home at Mona, Iowa, just south of Lyle, said he wants to energize and bring together a divided America, to work together for positive change. Although he had a brief question and answer period on various issues, the majority of time was spent on his reasons for running for president.

Winning world wars, reaching the moon, dissolving McCarthyism, establishing a massive infrastructure system, working for the vote for women, all came about when diverse groups agreed change was needed.

“We did all of those things together,” he said. “I am running for president because I believe in us; I believe together, we will rise.” 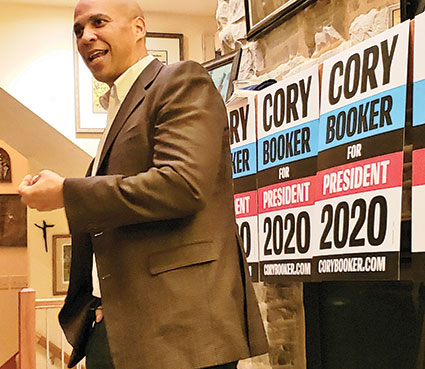 Presidential hopeful Sen. Cory Booker, D-New Jersey, speaks about his vision for America during a gathering at a home in Mona, Iowa, just south of Lyle on Sunday.
Deb Nicklay/newsroom@austindailyherald.com

Before the country can solve its current slate of problems, from climate change and rising healthcare costs, to gun violence and the challenges of immigration, the country needs leaders who can initiate “ a revival of civic grace in our country. It is about love of country and you cannot love your country if you do not love your fellow countrymen.”

He said he has worked to bring sides together when he was mayor of Newark, New Jersey, and as a junior senator. He said he has reached across the aisle in the Senate in the face of overwhelming bi-partisanship. He told of inviting Republican Sen. Ted Cruz to lunch to help establish relations.

Despite the difference in political beliefs, the pair worked to pass the Emergency Information Improvement Act, which provides federal assistance to non-profit broadcasting stations when hit with storms or other disasters.

Booker said his own heritage is an example of how the spirit of working together for social justice changes lives.

He spoke of his parents, moving from the South in the 1960s, who found opposition from real estate agents when trying to purchase a New Jersey home in a predominantly white neighborhood. They found that while they were told a home was off the market, the home was later sold to white purchasers. 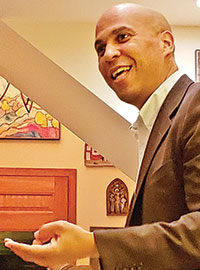 Sen. Cory Booker told a crowd on Sunday that the 2020 election needs to be more about binding together a divided America than just about beating Donald Trump.

Local neighbors and activists – mostly white – banded together to help uncover the illegal practice. A volunteer white couple approached the real estate agent, asking to bid on a house Bookers’ parents had been told was sold. The couple was told they could. On the day of closing, Booker’s dad and a volunteer lawyer showed up instead. The real estate agent, enraged, punched the lawyer in the mouth and sic’d his dog on Booker’s dad. But in the end, the house was sold to Bookers’ parents.

Years later, Booker said he asked the lawyer why he got involved in his parents’ case. He told Booker that his life changed when, sitting on his couch watching TV, he watched a 1965 television special report that showed the violence on the Edmund Pettus Bridge, when civil rights activists on the march from Selma to Montgomery, Alabama, were beaten in their effort to safeguard voting rights for blacks.

After watching the scenes from “Bloody Sunday,” he said he swore then he would devote a portion of his practice to pro bono work for those whose rights were threatened. Soon after, he was asked to help his parents.

“I am literally standing here right now because 60 years ago a guy on a couch … didn’t wait for somebody else, hoping change would be made,” Booker said. “He got up off the couch” and helped to initiate that change.

“The truth of America is that every generation has seen inequality, bigotry, hatred … but that never defined us; what has defined us is how we have chosen to respond to those things, how we come together to overcome those things,” Booker said.

Orange flags waving throughout Austin are a reminder that the city will become the epicenter of upland bird hunting this... read more