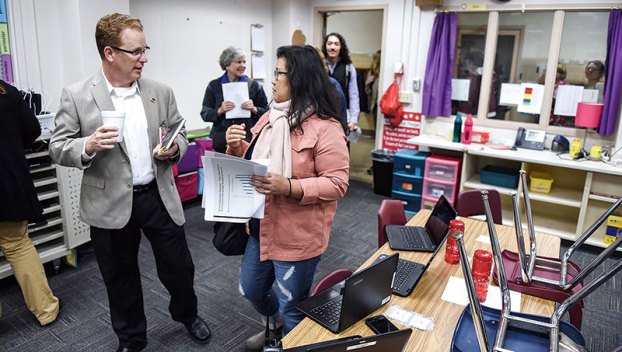 Austin Public Schools Head of Human Relations Mark Raymond talks with Minnesota House of Representative Kaohly Her, 64A as she and other representatives visit Sumner Elementary Wednesday morning. Eric Johnson/photodesk@austindailyherald.com

Going on the road: Mini Session allows members of the House of Representatives to be more accessible to the state

Members of the Minnesota House of Representatives were in Austin Wednesday for a mini session, the first time such an event has been held in over 20 years.

It’s part of an effort to make representatives more responsive and accessible to Minnesotans.

Throughout the day, legislators held a variety of hearings, tours and educational presentations in Austin.

Mini sessions are about dialog in an environment that sometimes can seem combative in St. Paul or Washington, D.C.

“That is absolutely what we’re trying to do,” said Rep. Jeanne Poppe (27B). “We’re trying to do this in a less partisan and contentious environment where we’re more open to hearing about ideas.” 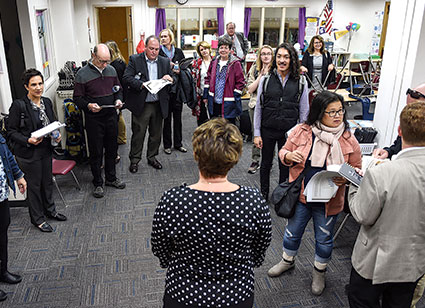 Members of the Minnesota House of Representatives and their staffs tour a learning suite at Sumner Elementary Wednesday morning. Eric Johnson/photodesk@austindailyherald.com

Forty representatives out of 134 were expected to take part in Wednesday’s session.

One of those was Rep. Raymond Dehn, 59B, who was chairing the House Subcommittee on Elections at Austin City Hall. Of the items that were discussed was the upcoming census and what it could mean in federal funds for the state of Minnesota as well as redistricting.

“I think it’s important,” Dehn said about getting out into the state. “For many folks, they feel we are isolated in St. Paul. We get back into other parts of the state and hear from other people. 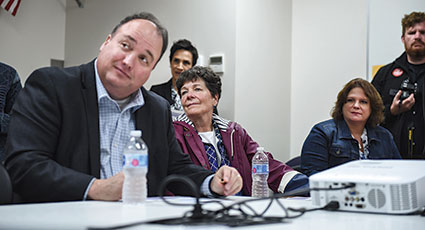 “It’s good, just having coffee at a college,” Dehn said. “It gives us a different sense.”

It’s not just good for the representatives visiting Austin, however. Those that are being visited reap the benefits of being able to provide those same representatives a better sense of the concerns within communities.

A small contingent of representatives visited Riverland Community College, Sumner Elementary and Austin High School. During the stops they learned first-hand about some of the hurdles schools are facing including funding issues.

“I think it’s a great thing to make a decision based on what they’ve actually seen,” said Sumner Principal Sheila Berger. “When someone asks, ‘do we really need counselors in every school?” they can reflect back. 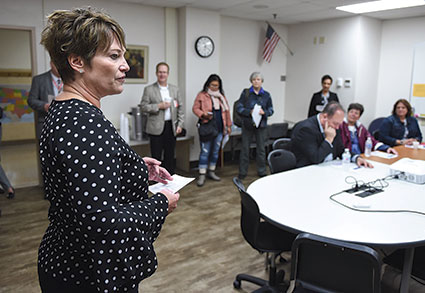 Sumner Elementary Principal Sheila Berger gives a presentation to members of the Minnesota House of Representatives during a visit to the school Wednesday morning. Eric Johnson/photodesk@austindailyherald.com

The representatives learned about the school’s modified calendar, the 2 + 2 Program and the Sumner’s learning suites.

They also got an up-close look at the diversity Austin is seeing within the community and the school district. Information provided by the school shows that of the Austin Public Schools population of students, 50.7 percent are a member of ethnic minority.

Data shows a different perspective than many rural districts face.

“For us in Austin, we don’t look like a typical rural community,” Berger said. “We have metro needs and funding is a big part of that.”

When it’s all said and done though, Berger is hoping that representatives see the reality of what schools and communities like Austin have to deal with.

“I really hope they see that we are doing the best with what we have,” Berger said. “But imagine what we can do with more funding.”

Pet Supplies Plus to hold grand opening this weekend

Pet Supplies Plus is hoping to take the next step towards becoming a fixture for the pet community as it... read more