OSAGE, Iowa – Julia Addington would never have guessed that her name would be written into the pages of Iowa history when she was elected Mitchell County’s superintendent of schools in 1869.

However, a group in Mitchell County today is making sure everyone knows of Addington’s success as the first woman to be elected to public office in Iowa. Most agree she was likely the first in the nation to hold elected office as well. 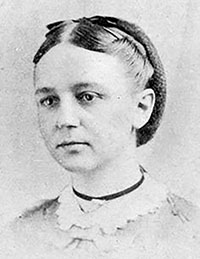 The Mitchell County Historic Preservation Association will host a 150th celebration to honor Addington on Saturday, Oct. 12, at the Cedar River Complex in Osage. A 6 p.m. reception will be followed by a program at 6:45 p.m. Refreshments will be served. The event is free and the public is encouraged to attend.

Other women attending who now hold elected office will be also recognized. There will be a special museum display of items related to Addington at the Mitchell County Historical Society, also housed in the CRC. In addition to the preservation association and historical society, the event is sponsored by both of the county’s political parties.

Penney Morse, head of the preservation association, said Addington’s achievement was an early indicator of Iowa’s leadership in our country’s elections.

“And today, Iowa continues to lead,” she said, citing the Iowa Caucus. “We hope our young women are inspired by her achievement, and those of all women who have served or are serving.” Over 30 percent of today’s state legislators are women.

Addington, a longtime teacher, found herself caught in a political tug-o-war over placement of the county seat. The county’s “bolters” — Republicans who disagreed with other county Republicans that Osage should be the county seat – placed her name on their slate of candidates for office. Her race ended in a tie with her opponent. She won the seat on a flip of a coin.

Before taking office, Addington sought an opinion on her eligibility to serve by contacting Iowa Attorney General Henry O’Connor. Women could not vote at that time — but could they serve?

Upon his review of Iowa law, O’Connor reported he could not find “any express provision making male citizenship a test of eligibility for the place, or excluding women,” he wrote.  That response gained national attention, especially from suffragettes such as Amelia Bloomer, Susan B. Anthony and Elizabeth Cady Stanton.

Addington admitted in her letter to O’Connor that she had not sought the seat but would serve since so many of her friends encouraged her to do so. Once her election was confirmed, she served with distinction. Her brief, two-year term was highlighted by the building of 17 new schools, by encouraging raises for teachers and recommending that her teachers improve their education knowledge by reading  professional journals and attending discussions and lectures on educational issues.

Addington’s thoughts on her landmark candidacy will never be fully known. She failed to serve a second term due to poor health and she died four years later, at the age of 46.

While there has never been an official declaration of being the first woman to be elected to public office in the U.S., Mullenbach said contact made with other states have not yielded the name of an earlier female public office-holder.

The Wide Angle: My adventures in hunting

I was feeling a lot of deja vu last weekend while covering the Minnesota Governor’s Pheasant Hunt Opener. While completely... read more