Eugene Joseph Leif, 87, of Austin, Minnesota, passed away peacefully with his loving family at his side on Friday, Sept. 20, 2019, at Sacred Heart Care Center in Austin. 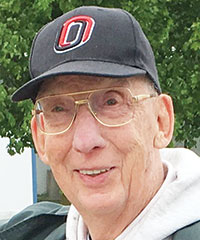 Gene was born on Oct. 6, 1931, in Wilton, North Dakota, to John and Frances (Feyen) Leif. After graduating from St. Augustine High School, Gene graduated from Loras College in Dubuque, Iowa, where he studied philosophy and theology. On May 15, 1954, Gene married the love of his life, Madonna Elaine Weis.

Gene worked at Hormel Foods for 45 years. Gene was a member of St. Edward’s and St. Augustine’s Parishes, Knights of Columbus and Pacelli Booster Club. He was an active volunteer for Habitat for Humanity, weddings, funerals, fish dinners, Mardi Gras Balls, Shamrock Balls and more.

He was an avid (successful) angler with a fish story for all occasions. Gene was an athlete, best known as a catcher in his baseball days. He remained very close to his fellow high school football referee colleagues (30+ years), his handball and racquetball pals, and recently, his ping-pong peeps. He also enjoyed cross-country skiing, rollerblading and pheasant hunting.

Gene loved God and family. He took every opportunity to spend time with his entire family, children, nieces and nephews, their kids, and even the tiniest of their kids. Gene and Elaine were always together, going to daily Mass followed by coffee, volunteering, dancing, traveling, visiting friends and family and just being together.

The family wishes to thank Dr. Lawrence Keenan for his friendship and care for Gene.

A funeral Mass will be held at 10:30 a.m. on Saturday Oct. 12, 2019, at St. Augustine Catholic Church in Austin with Father Gregory Leif officiating. Visitation will be held for one hour before Mass on Saturday at the church. In lieu of flowers, memorials are preferred to the donor’s choice or to the family to be donated to Gene’s charities. Arrangements are by Mayer Funeral Home. Condolences may be left online at www.mayerfh.com.