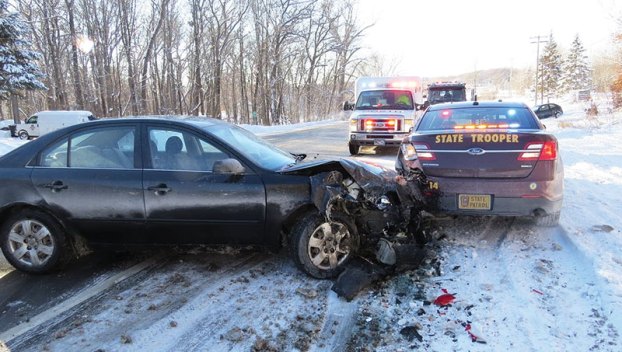 The Minnesota State Patrol says that 32 of its squad cars, like this one, have been damaged in crashes so far in 2019, a record for the agency. They’re urging drivers to steer clear of emergency vehicles, slow down and avoid distractions. Courtesy of MN State Patrol

Drivers hit 32 Minnesota state trooper vehicles in 2019 — an annual record with more than two months left to go in the year.

The patrol noted the record Tuesday, saying the toll was nearly double the crashes involving state patrol squads in 2018 and 2017, and topped the record set in 2009. All the crashes in 2019 involved troopers on the side of a road with their lights activated, at a traffic stop or other incident.

Patrol spokesperson Lt. Gordon Shank said that troopers have been hurt in the crashes, although none of the injuries were life threatening. Last year, Sgt. Mike Krukowski was nearly killed after a vehicle crashed through a fence on Interstate 35 West in Lakeville and struck his squad head on as he drove along a side street.

Shank said it’s a distressing barometer of dangerous driving — people distracted by phones or other things in their car, and driving too fast for road conditions. He said record snowfall in February may have played into the rise.

“We still gotta make sure with [winter] approaching again that people are driving to those conditions,” Shank said.

He noted that state law also requires drivers to change lanes as they approach an emergency vehicle with its lights on beside the road. If they can’t move over, they need to slow down.

The “move over” law is named after Minnesota trooper Ted Foss, killed in 2000. A semi hit his squad car, then slammed the vehicle into a minivan Foss had stopped for speeding along Interstate 90 near Lewiston, Minnesota.

“Watch your speed. Make sure you’re putting the distractions away and that you’re focusing on the road. Unsafe speeds and distracted driving causes most crashes,” Shank said.