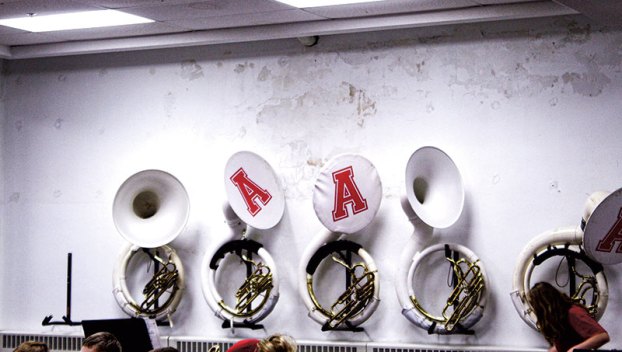 Some water from heavy rains this year flooded into the band room from the ongoing construction on the second floor. Soundproofing material on the walls needed to be stripped, and shelving was removed because of mold from the water damage. Hannah Yang/hannah.yang@austindailyherald.com

Construction on the multi-million dollar annex project has been seeing some major updates as the second floor of the structure will soon be enclosed.

Superintendent David Krenz shared that progress has been going “really well” on the first phase of the annex project.

“Things are moving along really well,” Krenz said. “The upstairs is close to being enclosed, which could really expedite the work being done upstairs. The choir room is almost ready to go, and we’re waiting on that. Hopefully our students will be able to move in there after Christmas.” 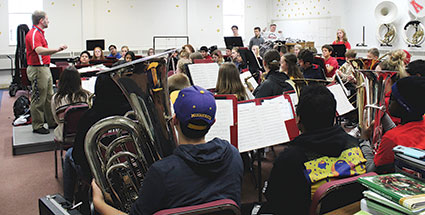 This project was part of the three-year partnership with MacPhail Center for Music and Austin Public Schools. Aiming to enhance community music programs in early 2018, the $11 million renovation on the high school’s annex building was announced. The project will add a 13,750 square feet addition to the second floor and 17,850 square feet of alterations.

The Hormel Foundation committed $8.7 million to put toward the project and APS will be financing the project during a 15-year time period. Renovations started back in early January 2019. From the proposed timeline, choir students were hoping to be moved into their new space by late August and the band and orchestra students would be settled into their new rooms after Christmas break. However, several factors led to the time frame being adjusted.

“It is behind our proposed schedule,” Krenz said. “There was still a fairly wide window for us to be able to operate. It’s been a combination of things, such as waiting for equipment to be delivered that was delayed, and our contractors weren’t able to get materials because of tariffs, which put a little bit of a delay, but nothing substantial that would hold back on the final completion. We’ve also had a lot of rain.” 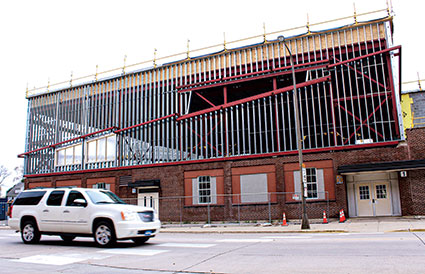 Technically, the choir students could be moved into their new room before Christmas, but Krenz noted that because there is a need to prepare for the upcoming winter concerts, it’s likely that students won’t be moved until after the holidays.

However, it’s well worth the wait for the students and staff to be able to eventually utilize the spaces that will enhance their performance, Krenz said, adding that, “The most exciting part of it is not just about the great new spaces, but the access to new technologies and new partnerships that will provide more opportunities for our kids.”

During the last few months, the AHS music classes have been continuing business as usual.

Many of the band students were excited and anticipating moving into the second floor and see differences in their music performances through access to new opportunities.

Austin High School Band Director Christoph Dundas said that during the construction and design phases of the project, the Austin School Board and administration worked closely with the music teachers in order to receive input on the design aspect of the new spaces. 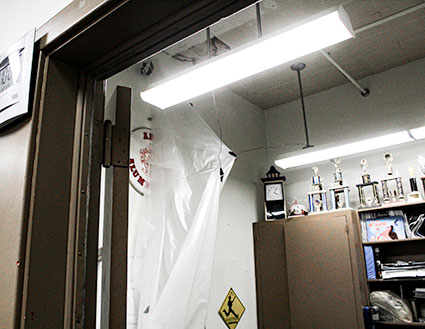 Water leaks into Christoph Dundas’ office inside the annex band room office prompted Dundas to move his things into the actual band room space. Some of his furniture needed to be thrown out as well as other memorabilia from previous Band Blasts.

This proved to be a valuable insight into what could contribute to further improving on the music curriculum within the various music programs at the schools.

“In past situations, I’ve seen schools build classrooms without music teacher input,” Dundas said. “I’ve been pleased that officials were including us from the start. They took our suggestions right away and the spaces are really going to be state of the art. It really can be the best music suite all around. I don’t think there needed to be any compromises. The board was willing to make this suite the best it can be for our students.”

Current spaces were built for music back in the 50s and 60s, however, Dundas said that the outdated spaces prevented him from being able to utilize more technological aspects to teaching students about music and performance. The ceilings were dropped lower at one point to accommodate sprinkler systems and recent water damage on the walls meant the soundproofing material had to be taken down, leaving an echo in acoustics.

“Space is limited,” Dundas said. “Trying to put things together and having different groups performing in the same space has been a challenge. They’d have to wait until the day of the concert to practice and put together something within one class period. Despite the challenges, the students are powering on through.” 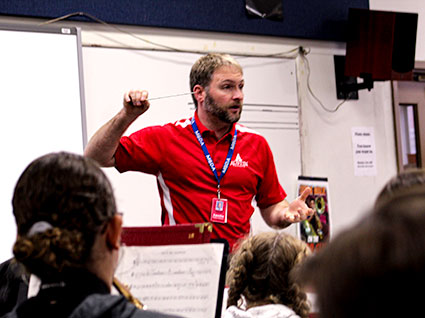 Despite the ongoing construction on the annex’s second floor at Austin High School, music classes are still keeping upbeat. Christoph Dundas, director of bands, conducts his freshmen students during practice.

Seniors who have played in the band room during their four years were anxiously waiting for their new classroom spaces. Alex Hamlin, a senior baritone saxophonist, and Abby Muller, a senior alto saxophonist, both believed that students were taking the construction timeline in stride.

“We know it will get better,” Muller said. “I think we’re yearning for the spaces more and more, and hopefully be able to get into it after Christmas. We made it this far, and we can wait just a little bit longer. It’ll be a sweet moment once we get into the rooms.”

For the time being, students and staff have been incorporating humor into their current environment. They had water leakage from the heavy rains, but Dundas appeared in a lifeguard costume and made his students brighten up.

“We’ve learned to accept it and Mr. Dundas said ‘I can stay mad, or just roll with it,’” Hamlin said. “I think we will all appreciate the spaces more once it’s here. We’re gonna keep powering through it and nothing is gonna bring us down.”

At about the halfway point, those who have had a hand in phase one of the Cedar River Watershed District’s... read more