Police have released the identity of an 18-year-old woman found dead in front of an Austin residence Saturday morning.

Austin Police Chief David McKichan stated the body was that of Erica Manzano of Austin. Manzano was found dead by a relative outside of a residence in the 800 block of Eighth Avenue Southwest. 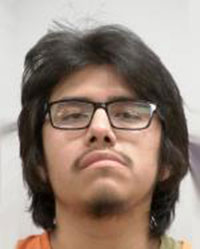 McKichan also identified a male arrested at the scene as Abraham Dario Cervantes-Paz, 20, of Austin. Cervantes-Paz was on the roof of the residence when police arrived. He fled, but was caught and arrested for a probation violation on June charges of felony second-degree assault-dangerous weapon, felony terroristic threats and misdemeanor domestic assault, for which he was on pretrial release.

The case is still under investigation. A cause of death has yet to be determined.

Police are investigating the cause of death of an 18-year-old female found outside an Austin residence on Saturday morning.

According to Austin Police Chief David McKichan, the woman was found by a family member at about 8:46 a.m. on Saturday in the 800 block of Eighth Avenue Southwest. When police arrived on the scene, a male subject was located on the roof of the residence. He initially fled police, who arrested him on a probation violation.

The APD is working with the Bureau of Criminal Apprehension to investigate the woman’s death. They are currently awaiting results from a medical examination.

Because the investigation is still ongoing, McKichan would not release any further information and would not give the identities of the deceased or the arrested male subject.

The Austin Community Scholarship Committee recently announced that scholarships, totaling $63,000, have been awarded to 21 local students for the... read more