Daniel Arthur Linbo, 76, of Kasson, Minnesota and formerly of Sargeant, Minnesota, passed away on Sept. 30, 2019, surrounded by family and friends at his home in Kasson following a courageous seven-year battle with colon cancer and over 20 years with Multiple Sclerosis (MS). 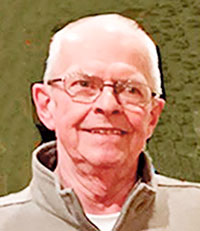 Daniel was born on June 9, 1943, in Rochester, Minnesota to LaVaine and John Linbo the oldest of four children. He grew up in Sargeant living with his parents and at the age of 13 moved to live with his grandparents, Edith and Anton Tiegen near Oslo, Minnesota, to help on the farm. Dan graduated from Hayfield High School and attended college in Mankato. He learned his great work ethic on the farm, working for his Uncle Glenn doing painting, working at Piggly Wiggly and being employed at Marigold Dairies, in Rochester until 1975. In 1976 Dan purchased the Sargeant Store selling groceries, clothing, and hardware. He shared his love for sweets, pointing out the candy behind the counter to everyone in the store, especially the children. Dan was the mayor of Sargeant for many years.

In 1985, Dan and his brother, Kevin, began selling crop and hail insurance along with fire, wind and liability. In 1994, Dan sold the Sargeant Store and became secretary and manager of the Vernon Edda Mutual Fire Insurance Co. for sixteen years for which he also sold insurance. Dan was a current, active board member of Vernon Edda, attending a board meeting just last week. When Dan retired as an agent, his son, Kirk, took over the Linbo Insurance Agency.

Dan enjoyed hunting, mostly deer and elk. He was able to bring home his trophy elk in 2010 while enjoying a hunt of a life-time with his sons and son-in-law. He loved to point out the beautiful mount whenever he had visitors in his home. He was a member of the Deer Hunters Association of Southeastern Minnesota. Dan also thoroughly enjoyed sports, especially watching his children and grandchildren play. Dan was a fan of Minnesota sports, specifically the Gophers, Twins, and Vikings.

Dan enjoyed being around people, sharing a good story, and having a deep laugh. His favorite time of day was meeting for coffee in the mornings in Sargeant. He was a long-time member at Evanger Lutheran Church in Sargeant where he served on the church council and is treasurer of the building fund.

Dan met his wife, Diane Larson of Kasson on a blind date with Diane’s sister Jean and husband Earl; they attended a Country Western show at Mayo Civic Center in Rochester. They were married on June 25, 1966 at South Zumbro Lutheran Church in rural Kasson. The entire family was appreciative of being able to celebrate their 50th wedding anniversary together with family and friends.

Dan is survived by his wife, Diane Linbo, of Kasson. They were blessed with three children who also survive, Tamara (Bruce) Goodman, of Zumbrota; Todd (Tracy) Linbo, of Aberdeen, South Dakota and Kirk (Rachel) Linbo, of Hayfield, Minnesota. He also leaves behind four grandchildren, Morgan Goodman, Mason Goodman, Jordy Linbo and Jaxon Linbo; three grand dogs, Maverick, Niko, and Cooper. Dan is survived by his sister, Rosie (Bruce) Mortenson, Minnetonka, Minnesota; his brother, Kevin Linbo of Hayfield and brother-in-law, Earl Johnson of Kasson along with many nieces and nephews.

Dan will be greatly missed by his loving family. The family would like to extend a heartfelt thank you to the Doctors and Nurses at Gonda 10 and Palliative Care at the Mayo Clinic and St. Croix Hospice for their compassionate care and thoughtfulness throughout his long journey with cancer and MS. We cannot express in words what wonderful care Dan and our family received.

Visitation will be 4-8 p.m. Friday, Oct. 4, 2019, at the Czaplewski Family Funeral Home, 501 2nd Street NW in Hayfield and one hour before the service at the church on Saturday. The funeral service will be 11 a.m. Saturday, Oct. 5, 2019, at Evanger Lutheran Church, 33554 660th Avenue, Sargeant, MN with the Rev. Paul Hauschild officiating. Interment will be in Evanger Lutheran Cemetery.