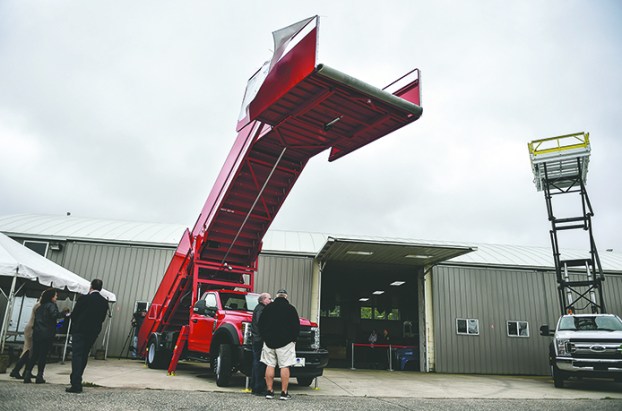 People check out one of the airplane stairways on display during Stinar’s open house Thursday in Blooming Prairie. The company will be moving to the community later this month. Eric Johnson/photodesk@austindailyherald.com

Comfort at Home; Stinar’s move to Blooming Prairie is an opportunity for the business

The news surely came as a shock when it was announced that long-time Blooming Prairie business Minimizer was sold and would be moving..

But Minimizer owner Craig Kruckeberg also saw an opportunity for another company he owns and so earlier this week it was announced that Stinar Corporation was moving from Eagen to Blooming Prairie, with the idea to fill the Minimizer location.

For 70 years, Stinar has been manufacturing passenger stairways, high lift trucks and lavatory/water service equipment for both commercial and government agencies.

That includes the same stairway the President of the United States walks down when leaving Air Force One.

“Wherever he goes … when he goes overseas they take the stairs with then,” Kruckeberg said during an open house Thursday in Blooming Prairie.

The 1983 Blooming Prairie graduate purchased Stinar in 2018 off of bankruptcy court, but the process of moving the entire company to Blooming Prairie came in a very short period of time once the decision was made.

Three weeks to be precise.

“Right now, it’s like somebody just took a 250 piece puzzle and said, ‘you take care of it,’” Kruckeberg said. “It was a very last minute thing.”

There was a time though when there was the idea to sell Stinar after it was purchased. Kruckeberg explained there is a lot of work yet to do to pull the company out of bankruptcy and in that regard, Kruckeberg sees the opportunity to do that by coming to Blooming Prairie.

“It’s just been us educating ourselves in the last year,” Kruckeberg said. “We just can’t keep doing business the same way.” 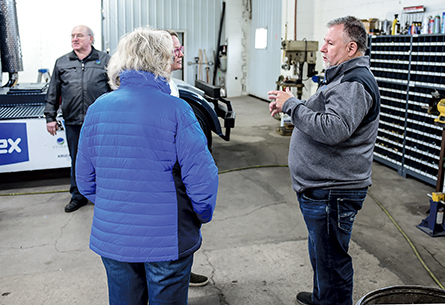 However, moving a company requires a lot, including employees. Out of the 20 that are currently employed at Stinar, six have committed to moving. The remaining employees need to give Kruckeberg an answer today.

However, even if they don’t decide to follow the company to Blooming Prairie, that doesn’t mean they will be out of a job.

“I’ve never laid anybody off,” Kruckeberg said. “If they don’t choose to move, then they will have a new job on Monday at one of my other companies.”

“A lot of them have been with us for 30 years and they are thinking, ‘let’s try something different,’” he added, talking about the employees coming to Blooming Prairie..

The move will also add a comfort level for Kruckeberg, who has a house in Blooming Prairie. The business is in a familiar area.

Minimizer will be moving from their location over the next 18 months. Once that move is completed then Stinar, which will in the near future be temporarily located in buildings on the northeast side of Blooming Prairie, along Highway 30, will move in.

It gives the company time to situate itself.

“We have to change the mindset,” Kruckeberg said. We have to start over.”

Tom Carlson works in government sales for Stinar and has been with the company for 50 years. During that time he worked for the founder of the company, Frank Stinar, as well as his two sons — Gene and Gary.

He sees the move as the right step at the right time.

“It’s going to help it survive,” Carlson said. “(Kruckeberg) is going to rejuvenate it. It’s the continuation of the name and I’m looking forward to doing more government contracts for Stinar.”

Stinar plans to be moved into Blooming Prairie by the end of October with production to begin Nov. 1 Kruckeberg said.

Hy-Vee, Inc. has released more information regarding the payment card incident first reported in August. According to a report released... read more