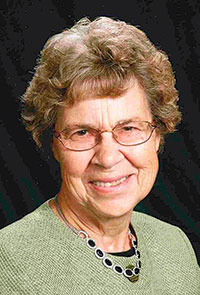 She was born on Sept. 19, 1932, in Frankfort Township, Pepin County, Wisconsin, to Henry and Jessie (Kern) Bradley. She attended school at Barry Corners and graduated from Pepin High School in 1951.

Following graduation, she worked in Minneapolis at Sears for a short time, and then for West National Life from 1951-1956.

On April 28, 1956, she was united in marriage to Clarence “Bud” Mattson at Lund Mission Covenant Church. They farmed near Plum City, Minnesota, for many years before moving to Red Wing, Minnesota, in the fall of 1981.

She worked at Braschlers Bakery and ministered with Bud at the Goodhue County Jail. In 2010, they moved to Austin, Minnesota, and for the past few months she was a resident of the Field Crest Care Center.

While living in Red Wing, she was a member of Concordia Lutheran Church, where she taught Sunday School and served in various capacities, just as she did in each of the churches they called home. Her family recalls the love that she shared with each of them, especially with her grandchildren and great-grandchildren.

Betty had a special gift of hospitality to all those who came into her home. She had all the characteristics of servant’s heart and will be dearly missed.

Betty is survived by her husband of 63 years, Bud; four daughters, Cheryl (Dale) Rozeboom of Mason, Michigan, Barbara (John) Cunningham of Citrus Heights, California, Debra (Michael) Larson of Pepin, Wisconsin, and Diane (Bill) Maxwell of Austin; 11 grandchildren; 16 great-grandchildren; one sister, Ilene (Allan) Honer of Citrus Heights; and many nieces and nephews. She was preceded in death by her parents; and an infant daughter, Brenda.

Funeral service will be at 11 a.m. on Saturday, Oct. 12, 2019, at Lund Mission Covenant Church in Lund, Wisconsin, with Pastors Darren Catron and Joel Anderson officiating. Visitation will be held for one hour prior to the service on Saturday at the church. Burial will be in the Oakwood Cemetery in Pepin. Memorials are preferred to the Samaritan’s Purse.

Online condolences may be sent to www.mahnfamilyfuneralhome.com