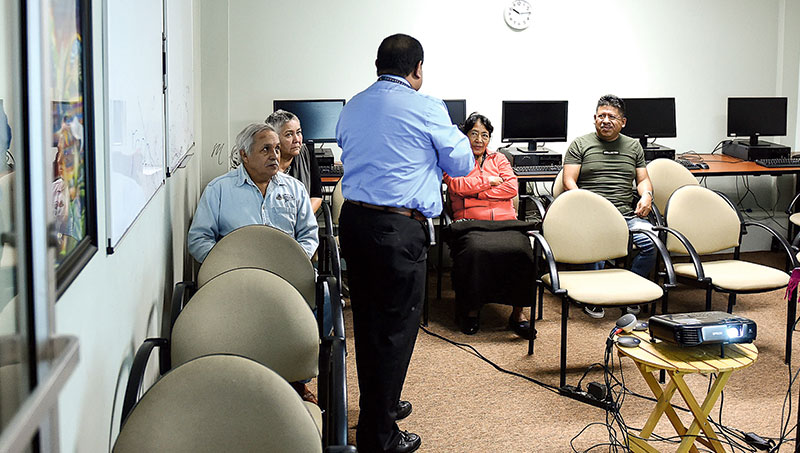 Jose Rivera, career navigator for CLUES in Austin, talks with those attending a finanical workshop at CLUES. Eric Johnson/photodesk@austindailyherald.com

Maríam De León would be willing to travel longer distances if it meant she would be able to make the health and wellness workshops offered by CLUES in downtown Austin.

“This is a good place,” the 59-year-old Dodge Center woman said. “Rain or snow, I’ll be there. As long as the roads aren’t bad.”

Every Wednesday, CLUES hosts workshops for those in Austin or surrounding communities who are in need of advice or resources that pertain to improving their quality of life. Lately, CLUES has been hosting virtual workshops from the Twin Cities to connect with people from Greater Minnesota.

CLUES (Comunidades Latinas Unidas en Servicio) has been in the Austin community for only a year, but the impact it has been having for the Latino community has been substantial, especially by answering questions for those who are nearing retirement age and are encountering health issues.

Career Navigator and Community Liaison Jose Rivera has been hosting workshops to help the minority community get engaged with taking ownership of their health and improving their quality of life. Especially for the aging population, having additional cultural ties helps them feel more comfortable when approaching subjects such as taking care of themselves as they grow older.

“We’ve been very busy helping our friends in different areas such as needing to see a doctor and get prescriptions for their health conditions like heart disease and diabetes,” Rivera said. “We see often that older community members struggle with depression, arthritis, cancer and insomnia. We’re hoping to talk to them about how to take care of themselves now that they’re getting older.”

It’s projected that by 2060, the percentage of Hispanics 65 or older is going to be around 22 percent in the United States, which is the largest racial and ethnic minority in that age group.

Through the virtual workshops, Rivera has been able to help seniors get access to resources from healthcare providers as well as receive wellness advice that they may not have known about, such as increasing intake of fruits and vegetables to help with heart health, as well as increasing physical activity, such as going for walks to improve muscles and joints. The workshops also discuss decreasing sugar intake by also minimizing and identifying different pieces of fruit that may actually contribute to weight loss.

“This is our goal, and we want to focus on making our community more united,” Rivera said. “We want to see everyone in our community be strong and be successful. There’s not a lot of places like CLUES where services are completely free. If they need to talk to someone about MNSure and healthcare coverage, we can get them connected to someone that can help them with that.”

Addressing the aging population has been an ongoing issue for Minnesota and for the rest of the United States. With many rural communities having more residents hitting retirement age and younger families with children leaving in search of more opportunities in metro areas, making sure that there are resources available for those in Greater Minnesota remains a priority for CLUES Associate Director of Community Health and Wealth Initiatives Carla Kohler.

Despite having significant populations of minorities living in southern Minnesota, the resources to help them maintain quality of life remains sparse. Inversely, there’s a growing need to address isolation within the aging population and tackling that while also keeping in mind the cultural aspects of working with elders is also taken into consideration.

“There are limitations that some of the aging may experience such as English proficiency and having access to a healthcare system if they don’t have transportation,” Kohler said. “Isolation transcends culture and race, and we’re hoping to reduce that feeling of isolation by bringing these virtual workshops to southern Minnesota.”

From the State Health Access Data Assistance Center and the Minnesota Department of Health, Latinos have the highest uninsured rates of any racial or ethnic group in Minnesota at 11.7 percent uninsured compared to 3.4 percent of non-Latino whites.

Health disparities within those populations also mean that there needs to be additional awareness in how the aging in minority groups are encountering barriers to them seeking services from a formal healthcare system:

•With limited English language proficiency, lack of insurance and a lack of understanding of how the United States health system works, those challenges obstruct timely, culturally-competent healthcare and contribute to persistent health disparities.

•Latinos are disproportionately at risk of developing chronic diseases such as asthma, cancer, diabetes, heart disease and hypertension. Not only is there a high prevalence of chronic or multiple chronic diseases in the U.S. Latino population, there is a majority of Latinos living with chronic disease self-report feeling that their diseases are inadequately managed.

From feedback gathered through the workshops, those who use CLUES have reported wanting more resources that address health and wellness, especially when it came to aging. By offering a culturally specific Spanish language chronic disease management program, CLUES can connect with participants in a meaningful way while facilitating the engagement necessary to make a positive change.

Classes are offered to both seniors and their caregivers in order to support the wellbeing of both populations, which in turn enhances the length of their ability to live well at home.

“We have incorporated healthy wellness programs and improving communications so that clients can work through technology and reach someone who can help them,” Kohler said. “It’s very empowering to have these presentations so that it brings community voices to us.”

Many seniors within minority populations are often in lower-income backgrounds and aren’t able to retire. Some work well past their retirement age and take up labor-intensive work that ultimately affects their health and physical well-being down the road. Culturally, many often desire to stay with their children and not in senior housing.

These choices and sacrifices that the elderly have to make will ultimately affect their ability to take care of themselves when they grow older.

Navigating the health system is met with obstacles such as varying education, income, and English proficiency levels, lack of insurance and lack of materials and resources that are culturally and age-appropriate for all caregivers. Caregivers themselves may have varying levels of education and face complicated work schedules, shared and not always equal caregiving responsibilities, lack of materials that are culturally and age appropriate for all caregivers and distance between family members.

That’s further displayed from a report by Evercare and the National Alliance for Caregiving. According to the report, Latinos work more hours per week providing care to their loved ones (37 hours compared to 31 hours) and assist with more daily activities (2.6 compared to 1.9) when compared with the national average.

“The workshops on nutrition and exercise are so important, and it’s all about maintaining a healthy lifestyle,” De  León    said. “But, not many people can take off work to be here, and we need to be taking extra care of our bodies. Many Hispanics I know are still working in their 60s. CLUES workshop is teaching us how to eat healthy, and avoid foods with chemicals in them. We’re getting older, and our bodies are breaking down too much to keep working more.”

“CLUES is exploring how to make that happen,” Kohler shared. “We do know from data that we pulled that there are minimal resources for minority populations living in Greater Minnesota. We need to be able to reach down into southern Minnesota so that we can be able to address these disparities. It can be an isolating experience living in rural areas, and we want people to create bonds and relationships through these workshops to improve their healthy wellbeing.”

As for whether the workshop attendees take what they learn and put it into action, De León said that she has since become more physically active and takes regular walks to improve her muscles. Despite wishing there was a closer CLUES office to Dodge County, De León said that she hopes that those within the Hispanic community can make the trip to Austin.

“It’s a small town and everybody is working,” she said. “They could really benefit from coming to these workshops. They can make friends and meet others who are going through the same thing as them. Our goal is to get healthy. Especially if you’re in your 50s. I’d love to see them move more.”