The charge was reduced from felony second-degree drugs-sale of methamphetamine in a park zone-as part of the agreement. 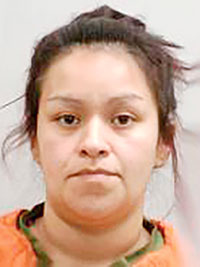 Court documents state that narcotics officers met with a confidential reliable informant (CRI) on Jan. 11, 2017, about purchasing methamphetamine from Navarro Renteria. The CRI and his vehicle were searched and he was provided with buy money and an audio transmitter. He was then monitored as he met Navarro Renteria at a residence in the 400 block of Third Avenue Southwest. The CRI then met with police at a predetermined location and advised that he was waiting for the drugs to be delivered.

The CRI contacted Navarro Renteria by phone later that day and was told to meet her at a residence in the 900 block of Fourth Avenue Southwest, within 300 feet of Galloway Park. The CRI was again monitored as he met Navarro Renteria at the residence and purchased methamphetamine. He then met with police and surrendered the drugs. He confirmed Navarro Renteria and Samuel Michael Tanner (who was sentenced to 78 months in prison last year on a felony drug crime) sold him the drugs. A Bureau of Criminal Apprehension laboratory analysis confirmed the CRI was sold 6.68 grams of methamphetamine.

Navarro Renteria will be sentenced on Nov. 25.

Man gets 62 months for DWI

Ryan Matthew Vangness, 33, of Canton was sentenced to 62 months in the Minnesota Correctional Facility in St. Cloud, with... read more