A woman who allegedly held her hand over an 8-year-old girl’s mouth and nose made her first appearance on Friday in Mower County District Court.

According to the court complaint, Mower County Deputies were dispatched on the evening of Dec. 16, 2018, to the 58200 block of 300th Street in Waltham Township on a report that Sheimo and an 8-year-old girl had driven into a ditch and then walked across a field in very cold conditions. 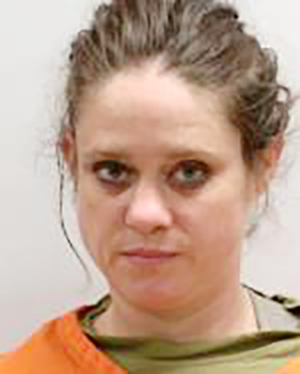 The vehicle, a 2008 Nissan Versa, was located in the ditch at 307th Street and 580th Avenue. It was determined the vehicle had been driving on 307th Street when it went through the T-intersection and into the ditch. Law enforcement observed two sets of footprints walking away from the vehicle, which was still running.

A deputy tried to interview Sheimo, who was being attended to for frostbite because she was only wearing sandals when she walked through the field. Sheimo said that she saw bright lights that blinded her and made her drive into the ditch. She was then transported to Mayo Clinic Hospital, St. Marys Campus-Rochester.

While en route, the 8-year-old girl with Sheimo told Hayfield Ambulance EMTs that Sheimo had “choked” her after the car went off the road.

Law enforcement interviewed the girl at the hospital. She said Sheimo placed her hand over her nose and mouth “really tight” and told her to be quiet or “the ghosts” would hear them. She said Sheimo hurt her and that she did not feel safe around her. The girl was examined and later released to a relative.

A Mower County detective later reviewed reports from Mayo Clinic, Olmsted County Community Services and the Rochester Police Department. In them, the victim indicated Sheimo had held her hand over her nose and mouth after pushing her to the ground and placing her knee on her abdomen. She said Sheimo released her after a few minutes, after which they walked across the field and found two individuals who called for help. She confirmed she was unable to breathe while Sheimo held her hand over her mouth and throat and that Sheimo’s ring scratched her nose.

A medical examination revealed fine lacerations on the victim’s nose and mouth and erythema (stage 1 frostbite) on her right shin and calf.

A review of Sheimo’s criminal record shows prior convictions for drug possession, shoplifting, issuing dishonored checks and disorderly conduct. She currently has active arrest warrants in Dakota County for charges of drug possession and fleeing a peace officer and Winona County for two charges of third-degree DWI.