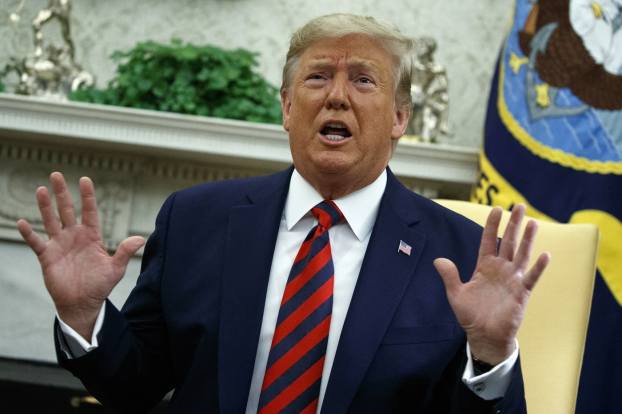 President Trump speaks during a meeting with Australian Prime Minister Scott Morrison in the Oval Office of the White House on Friday, Sept. 20, 2019, Washington. Here's a glimpse at how Minnesota’s U.S. House and Senate members view an impeachment inquiry into President Trump. Evan Vucci/AP Photo file

Where do members of Minnesota’s delegation stand on impeachment?

Ground is shifting rapidly around the prospect of President Trump facing impeachment proceedings in Washington, with more than half of the state’s congressional delegation pushing for that process to start.

In the wake of reports that Trump sought assistance from Ukraine’s president in investigating former Vice President Joe Biden, a potential 2020 rival, MPR News surveyed the delegation on where members stand.

Not all of the reaction is falling along party lines, and not all members have weighed in. Some didn’t provide new information but have commented on impeachment in the past.

Craig wants impeachment hearings to happen “immediately, fairly and impartially.” Before Monday, the first-termer from a swing district had been reluctant to join calls for impeachment. On MPR News’ Morning Edition on Tuesday, Craig said the situation had changed.

“When the president revealed on Sunday that he admitted to calling the Ukranian government himself and asking his personal counsel to get involved, and now we understand that Congress appropriated foreign aid was held up, there’s no doubt in my mind that this is just wrong and it’s putting our national security at risk.”

Phillips voiced support Monday for moving forward with an investigation that could result in impeachment. The first-term congressman said Trump has exhibited a pattern that falls between corruption and treason.

“If the reports are corroborated, we must pursue articles of impeachment and report them to the full House of Representatives for immediate consideration.”

McCollum, a longtime representative, had supported impeachment related to the investigation of Russian interference in the 2016 election and the subsequent report from special counsel Robert Mueller on activities by Trump and his associates. She said the Ukraine allegation add to the rationale for moving forward.

“In no uncertain terms, this event alone reaches the threshold of high crimes and misdemeanors laid out by our founders in the U.S. Constitution,” McCollum said in a statement Monday.

The most vocal Trump antagonist in the delegation, Omar is full square behind impeachment.

The first-term representative took to Twitter on Monday to reinforce her belief that Trump should face repercussions.

“It’s not if we are going to impeach this president — it’s when,” she wrote.

Klobuchar, who is her third term and running for president, first came out for an impeachment probe in June. She said Trump’s actions were inviting foreign interference in U.S. elections and demanded a strong congressional response. On Tuesday, she reiterated her call to push impeachment ahead.

If the House voted to impeach Trump, it would be up to the Senate to hold a trial and a vote on whether the president should be removed. That outcome would require a two-thirds vote in a chamber Republicans narrowly control.

On Tuesday, Smith joined calls for impeachment hearings in the House while reserving the decision on whether Trump should be removed by the Senate.

“Impeachment is the only way in our system of constitutional checks and balances to establish whether a president has abused his power and put his own interests ahead of our national security and the rule of law.”

Hagedorn has said little about the Ukraine allegations. His office didn’t respond to a request for comment Tuesday. But the first-term representative has been steadfast against impeachment, voting to sidetrack a resolution on the matter in July. On social media and in a town hall, he has said he wouldn’t vote for impeachment “as it stands.”

“The American people join me in opposing impeachment, yet socialist Democrats in Congress keep pushing that direction,” Hagedorn said in July.

Emmer also voted to squash the resolution on heading toward impeachment in July. As chairman of the National Republican Congressional Committee, Emmer has had a hand in crafting critical responses to Democrats who have come out for impeachment. Emmer’s office didn’t respond to a request Tuesday.

“Make no mistake about it: Backing impeachment will cost the Democrats their majority in 2020,” Emmer said.

Expecting a stiff challenge in a district Trump won big in 2016, Peterson is the only delegation Democrat not sold on impeachment.

In a statement Tuesday, Peterson suggested the process would backfire.

“Without significant bipartisan support, impeachment proceedings will be a lengthy and divisive action with no resolution,” Peterson wrote “I believe it will be a failed process that will end up even further dividing our country and weakening our ability to act together on issues like passing USMCA, containing foreign threats and growing our economy.”

Stauber has been quiet on impeachment. The first-term representative, who had Trump’s help in the 2018 campaign, helped defeat the impeachment resolution in July. His office didn’t respond to a request for comment Tuesday nor has he said much on social media about controversies involving Trump.

DETROIT (AP) — The Minnesota Twins took another step toward an AL Central title with a 4-2 win over the... read more