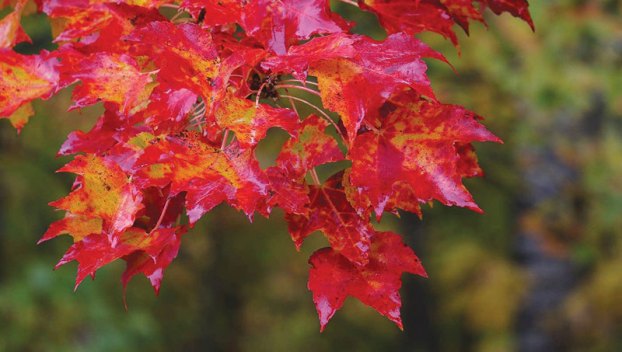 Maple leaves burst with color, even on a rainy day in Duluth in 2018. Andrew Krueger/MPR News

Abundant rainfall this year may lead to a vibrant display of fall color across Minnesota in the coming weeks.

But where the rain was not just plentiful but excessive, the leaves of some trees stressed by flooded roots are turning colors earlier than usual.

In general, there isn’t much fall color across Minnesota — yet. Val Cervenka, a forest health program consultant with the Minnesota Department of Natural Resources, said frosty nights combined with mild, sunny days are needed to kick-start the process.

“We can look forward to the brightest color being after a light frost — not a killing frost, but very chilly temps at night,” she said.

“I think the whole state can look forward to great color because of all the moisture that most of us have had. You know, trees need to be healthy going into the fall in order to produce the great color. So this moisture has really actually done a great thing for most of our trees.”

The heavy rain of the past week shouldn’t have a negative effect on fall colors, Cervenka said — as long as the state sees some sunny, dry days in the next few weeks.

The color change should start in earnest in the next couple weeks in far northern Minnesota, then progress southward with the colder conditions, winding up in mid-October in far southern parts of the state.

If you’re scouting good places to take photos of the colors, Cervenka recommends looking for areas with a good diversity of trees — including conifers that can provide nice contrast to the red and yellow leaves.

The DNR will post fall color updates at https://www.dnr.state.mn.us/fall_colors/media.html.

Cervenka noted that some pockets of trees in Minnesota already have colorful leaves — but that’s not part of the usual fall changeover.

Instead, it may be due to the weeks and months of flooding earlier this year.

“If trees are standing in water, or if they have stood in water for a long time in certain parts of the state — like Fort Snelling, for example, Fort Snelling State Park has trees under water still. … Trees are going to either die or just have an early color change because roots aren’t able to … get any air,” she said. “And so trees show stress by turning color.”

It was announced on Friday that Dodge and Olmsted counties are set to receive more than $3 million in state... read more