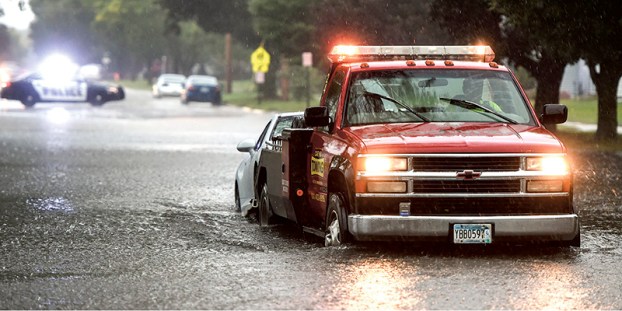 A tow truck pulls a stranded car from the intersection of Fourth Ave. and 16th Street SE Thursday afternoon. It’s estimated that about 3 to 4 inches of rain fell in about two hours as storms marched through the area. Eric Johnson/photodesk@austindailyherald.com

According to National Weather Service-La Crosse meteorologist Dan Jones, as of 3:30 p.m. Thursday storms dumped anywhere from 3 to 4 ½ inches of rain over the Austin and Mower County area over the previous 24 hours.

A car sits stranded at the intersection of Fourth Ave. and 16th Street SE as heavy rains caused several intersection in Austin to flood. ric Johnson/photodesk@austindailyherald.com

Flooding became an issue during the heavy rains, with the Austin Police Department advising people on its Facebook page to avoid traveling on Austin roads until the water had time to drain.

Flooding forced the closure of Interstate 90 in both directions from Sixth Street NE to Highway 56.

The Interstate was still closed by the time this paper was sent to print, with the Minnesota Department of Transportation estimating the closure would continue until about 10 p.m. on Thursday.

Throughout Austin, the rapidly rising waters caused localized flooding resulting in several vehicles being reported as stranded because they tried to drive through the water. 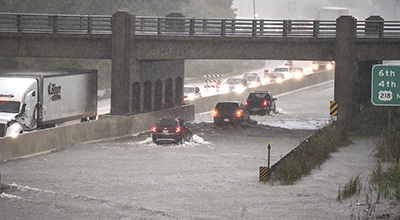 Early Thursday afternoon, per scanner traffic, spotters were called out in Austin, Lyle and Adams. Radar indicated rotation was reported by the NWS between Austin and Lyle though nothing came of it.