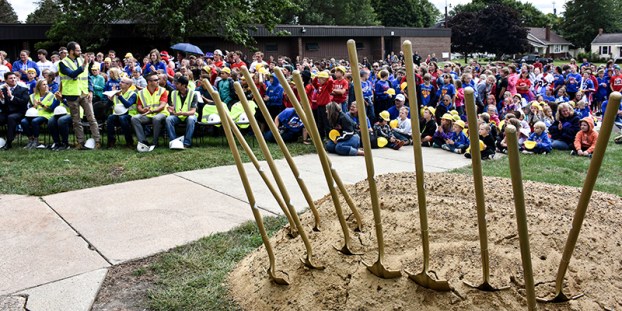 A large crowd of students, teachers, paraprofessionals and community members gathered outside of Southland Middle/High School on Friday afternoon for the groundbreaking ceremony. Hannah Yang/hannah.yang@austindailyherald.com

ADAMS—As Southland Schools celebrated its homecoming on Friday, it was fitting that the district and community marked the beginning of another chapter in its school history.

About 400 people were standing outside the middle/high school building in Adams on Friday afternoon. Southland Elementary School students were bused in and were greeted to the sights and sounds of the high school band as well as older peers donned in red and blue for spirit day.

Community members, teachers, paraprofessionals and administrators stood in the crowd as hard hats and construction vests were distributed. A ceremonial pile of sand sat near the entrance of the school building, where just to the left fences were erected.

Approaching the podium was new Southland Superintendent Scott Hall, who also happens to be the Southland Middle/High School principal. He took a look at the massive crowd and greeted guests as officials gathered to dig into the ground as a ceremonial representation of the start of the project. 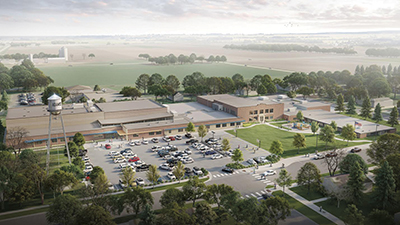 An artist’s rendition of what the school will look like when completed. Photo provided

It’s a transformative moment in Southland’s history. Once the project is finished, the Southland Elementary School students will be joining middle/high school students in Adams, and the school building in Rose Creek will close. In August 2020, Southland School will have grades K-12.

From technological upgrades like improving HVAC systems to adding additional classrooms and modernizing some of the learning areas, Adams will be seeing its school district expand during a time when many other districts are struggling to find support for investing into the schools and, ultimately, their students.

“We really cannot thank the community enough,” said Michelle Nelsen, Southland School Board chairwoman. “We are so excited to see this project get started, and the community has had such a big role in this. There are not enough thanks. We know it’s not easy dealing with change, and we know it’s not easy investing in these big projects. But, we really cannot do this without you. We are so blessed and lucky for having a community that’s solid in its support for our district.”

Once Nelsen finished, school  officials lined up next to golden shovels that were pressed into the sand pile, dug in and tossed an arch of sand into the air with cheers erupting from the crowd. It was only the beginning of what will be the next era in Southland’s history.

Through perseverance, compromise and a lot of research, Southland was able to bring the community together and figure out a solution to address the aging facility needs that the district had as well as resolving the spacing issues once Southland Elementary School closes.

Back in 2018, an $18.2 million bond referendum was approved by district taxpayers to help address facility needs as well as adding more classroom spaces and upgrading technology. The goal was to consolidate Southland Elementary School with the middle/high school facility in Adams. 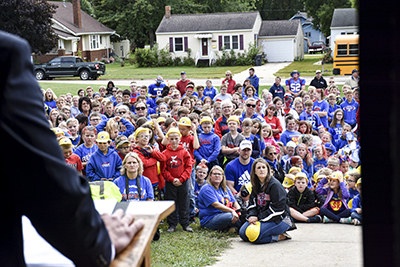 There were two questions on the ballot, including one for renovations at $15.8 million and another for a gym at $2.4 million. The district had attempted another bond referendum in 2017 for $24.5 million, but the community shot down the proposal at the ballot boxes. Officials then took to surveys to determine how much taxpayers were willing to pay for needed renovations.

Watching the progress being made for Southland took time, but many stuck through the process to see something positive come out of something negative. Despite the controversy surrounding the decision, Southland School Board had to approve closing the elementary school in Rose Creek, attributing declining student enrollment and decreasing state funding as two of the major reasons why.

Although it’s unknown as to when exactly Southland Elementary School would close, Hall anticipates the project ending closer to August 2020. By then, the district should have a clear picture in when the elementary school students and staff would be starting the new school year in a new environment.

“We’ll know more once it gets closer to the end of the construction project,” Hall said. “The youngsters and our staff are looking forward to being a part of the building and are anticipating it. It’s been really great. Both of our current buildings were aging, and we knew there were going to be significant upgrades pending in the future.”

So far, Southland is continuing its fundraising campaign to help raise money to build a new auditorium for $630,000. The United Farmers State Bank in Adams started off with gifting $100,000 to the district to put toward the space as well as promising to match an additional $150,000 for donations to the project that was not originally part of the voted bond referendum, according to a previous story.

Southland is also experiencing other changes. The district is taking submissions for ideas on the new lettering for the district’s masthead and the official red and blue colors were identified as Southland’s colors. Down the road, the Rebels mascot may undergo some modernization, otherwise the Rebels will stay mostly the same. 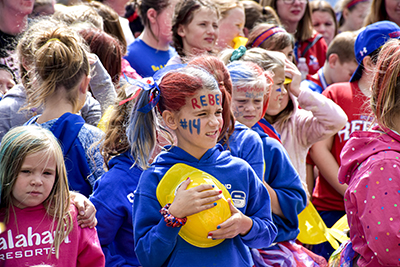 That loyalty was displayed during Homecoming festivities. Students wearing crazy costumes and sporting painted faces, and parents who came out to see the groundbreaking, were excited to see where the future would go from here for Southland.

It was also a surreal moment for those who were involved with the project heavily from the beginning and spearheading efforts. Seeing the moment the shovels touch the ground meant everything to former Southland Superintendent Jeff Sampson, who recently resigned for a job offer as superintendent in Cannon Falls.

With one shovelful of sand, Sampson dug into the pile and tossed the sand into the air, a symbol that the baton was passed to another and that the district would have a secure future ahead.

“I’m very fortunate to be invited back for this groundbreaking,” he said. “It means a lot to the communities in this district, and to the kids. I’m happy to be a part of this moment. This really gives me goosebumps, and it’s so surreal to drive by and see the construction fences that were put up. I wish all the families nothing but the best.”