‘She’s there for everybody’; Hayfield woman one of five in nation named Ms. Goodwill Ambassador for National American Legion Auxiliary 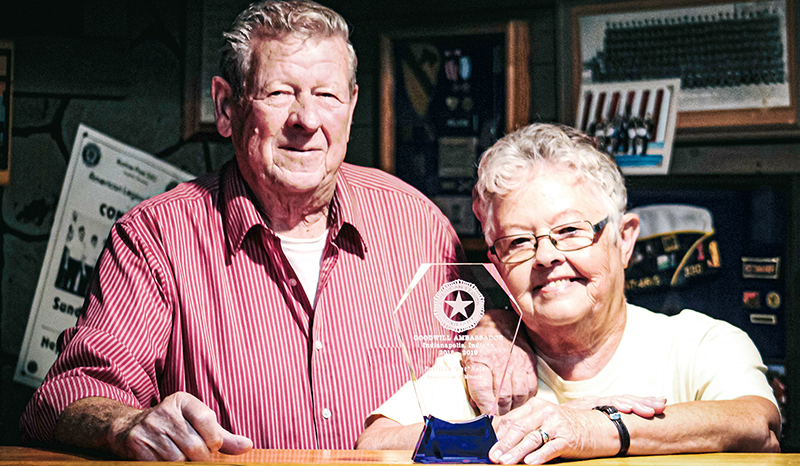 Jerome “Jerry” Nelson and Patricia “Pat” Nelson of Hayfield, stand in front of various memorabilia and momentos during Jerry’s time in the military, while Pat’s award sits front and center. She was recently selected as one of four winners of the “Ms. Goodwill Ambassador” by the National American Legion. Hannah Yang/hannah.yang@austindailyherald.com

For 42 years, she worked various committees, organized countless events to promote service and patriotism in the community, as well as showing compassion and love for the veterans. She also served as one of the past presidents of the auxiliary twice.

Despite the list of accomplishment, Nelson doesn’t want any attention for it. If someone wanted to acknowledge her work, she would tell them to cease and desist.

Sometimes, Nelson believed that simply doing the right thing was the best thing to do for others.

That being said, it came as quite a shock when the National American Legion Auxiliary reached out to her last month and notified her that she was one of five winners chosen across the country to receive a “Ms. Goodwill Ambassador Award.” There was really no other way for her to respond, other than to deny that it was real.

“I was a blubbery idiot. They asked ‘Is this Patricia Nelson?’ and I said yes,’” Nelson said. “Well, they said ‘Congratulations on your award.’ I was confused at what award they were talking about, and they said congrats on being a Goodwill Ambassador from nationals. I said ‘They must have the wrong Patricia Nelson.’ They told me, ‘Well, you’re the right one.’”

Aligned with the Preamble of the United States Constitution “to promote peace and good will,” the Ms. Goodwill Ambassador Award was a new accolade that was created by the National American Legion Auxiliary earlier this year in order to promote civility and camaraderie amongst members. 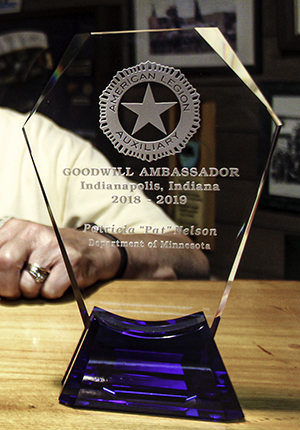 To be considered for the award, the individual must be nominated and have an essay submitted describing their deeds and service committed for their American Legion Auxiliary. The essay moves up several different agencies before reaching the national department, where it would be determined if the individual would be chosen as the winner of their division and be recognized at the National Convention in Indianapolis.

Knowing that Nelson would not take any credit for doing the amount of work she does for the American Legion, Barb Oakland decided to take matters into her own hands and secretly submit the application and essay.

However, the Hayfield American Legion Auxiliary president  intended to submit the essay for state recognition. Never did she think the essay would reach the national level and win, marking the first time that a member has won a national award.

“She does so much for everybody, and because she’s a humble person, she never wants us to recognize her,” Oakland said. “I decided that she needs to be recognized, and so I sent the application to the state department. Funny thing was, I had no idea that it would go up the chain to nationals.”

During the five years of her presidency, Oakland fondly thought of Nelson as her mentor; someone who would tell her how to run meetings, assist with organizing events and taught her everything about leadership for the auxiliary. Describing Nelson to be selfless and self-sacrificial, Oakland believed Nelson’s humility was too strong at times. The way her friend would organize countless events to benefit veterans, teaching younger generations about being a good American citizen, and helping others through community service projects, inspired numerous members of Post 330.

“(Pat’s) just a super mother, super person and super … well, just unbelievable,” Oakland said. “The one thing that describes Pat is that she has red, white and blue running through her veins. She’s there for everybody. Whenever we have new members join, Pat was always right there.” 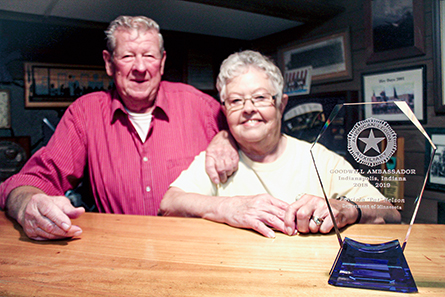 Showing her humility, Nelson said that the biggest reason she got the award was because of her husband, Jerome “Jerry” Nelson, a retired Vietnam-era veteran who served in Korea and was a past commander of Hayfield American Legion Post 330. Adding that, “Without him, I wouldn’t be able to do this. Without him, I wouldn’t be eligible for being a member of the auxiliary.”

It was one of the most momentous occasions that Pat and Jerry experienced. For not wanting any attention for her good deeds, Pat had to accept the award in front of hundreds of people. Sitting in the audience was Jerry, who was her biggest supporter.

“He was very happy and told me he’s very proud,” Pat said. “So, just the fact that we could be together and make the trip together and doing this together as a family affair made him happy. This was an unbelievable once in a lifetime experience. It was unreal.”

Back home, Pat was treated to a homecoming event by her friends at the auxiliary and she proudly took home a trophy that commemorated her service that won national attention. No one was prouder of Pat than Jerry.