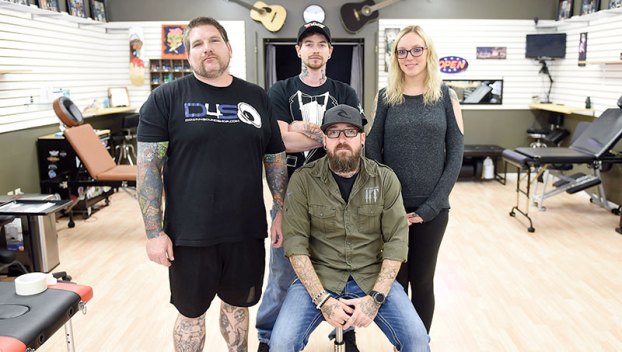 It’s been a number of years since Chad Iverson opened his own tattoo parlor — Ivy’s Ink.

There’s also been a number of locations, including some time spent in Florida, but Ivy’s Ink is back downtown, moving into where Everything Hobby once resided on Fourth Avenue NE.

And the move got started simply because Iverson was looking for remote control car battery. Stopping into Everything Hobby, Iverson got to talking with owner Kevin Guy who told him he was looking to close the space.

Iverson had been looking for a new location, but wasn’t necessarily thinking of a move back downtown on this day.

However, as it turned out it was just one step in a series of fortuitous steps that ultimate saw him open his new location on a very eventful day.

“We actually got it open during the Austin ArtWorks Festival,” Iverson said. “We propped the door open and sold Ivy’s Ink shirts. We were wiped out.”

It only took about four days to get the business operating and the day before the festival, Iverson received his licensing from the Minnesota Department of Health and Precision Signs got the signage up.

Not bad for a guy just going in to get an RC battery. 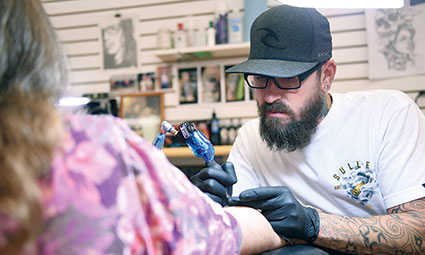 Counting himself, there are three tattoo artists at Ivy’s Ink. He’s hoping to jump that number to four in the future.

“It was going so smooth,” he said.

The move, however; had more practical reasons. First and foremost, was space. Pryor to the new location Ivy’s Ink was on Oakland Ave. West, but the business was growing faster than the space allowed.

“We got too busy,” Iverson said. “We were booked out too far.”

Iverson was also looking to hire another artist, but the space issue was cutting into that as well.

“I needed more tattoo arists,” Iverson explained. “I’ve got a friend who got into tattooing and I thought about hiring him, but I didn’t have a spot.”

A third issue arose from the tight space was with those other things that Ivy’s Ink offers. Iverson is getting more into selling clothes and there’s also Modern Smoke, which is owned and operated by his girlfriend Emily Erickson.

The business also does it’s own vinyl in the form of stickers, with an idea brewing in the back of Iverson’s mind to maybe offer screen printing down the line.

Ivy’s Ink now has three artists, counting himself, which Iverson hopes will get bumped up to four. While finding a quality tattoo artist can sometimes be difficult, Iverson has chosen to go a different route. 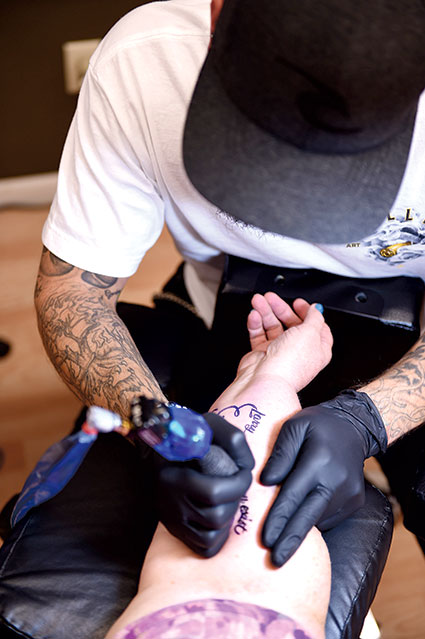 “It’s gotten to a point where finding a tattoo artist is harder than finding an artist with ability and training them,” Iverson said.

Even with the move completed, Iverson has more on his plate. An idea to take Ivy’s Ink and spanning it all the way to Florida.

“My end goal is to have a shop in Florida and somewhere in between,” Iverson said. “Go back and forth. It takes a good staff, but it’s closer to a reachable target.”

Ivy’s Ink is open noon to 7p.m., Tuesday through Saturday. While the shop doesn’t take in walk-in customers it will take walk-in consultations.

For more information call, 1-507-438-0502. They can also be reached through Facebook at Facebook.com/ivysinktattoo or by email at ivysinktat2@gmail.com

Come and party at the Hormel Historic Home