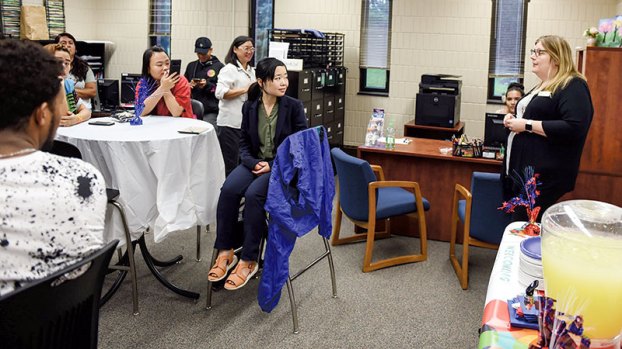 Sara Karki, of the Immigrant Law Center of Minnesota speaks to those attending Wednesday’s citizenship celebration, a part of Welcome Week. Eric Johnson/photodesk@austindailyherald.com

Riverland celebrates new US citizens by welcoming them

Decorated with red, white and blue along with a banner that declared “celebrate,” Austin’s newest citizens gathered together to commemorate the journeys that brought them to the United States.

As part of Welcome Week, the Adult Learning Class at Riverland Community College hosted a party for those who became new U.S. citizens, honoring their journeys that brought them to town. Rather than focusing on the differences, the celebration was meant to help establish a dialogue between neighbors as well as meeting someone they never met before.

Greeted with cake and other refreshments, students from the Adult Learning Class shared their experiences of immigration, and how they were progressing in becoming a naturalized citizen.

“I’m thankful that we’re doing this to celebrate our new residents and encouraging neighbors talking to neighbors, and getting to know who our new neighbors are,” said Craig Clark, city administrator. “We want to do everything we can to make to all a part of our community.”

A refugee from Ethiopia, Eyasu Gebray’s journey took to make it to the United States was a lengthy process.

However, the 30-year-old man settled in Austin and found a community which he believed made him feel like he belonged. He came to the U.S. on June 21, 2012, and lived for eight months in Minneapolis. Shortly after, Gebray moved down to Austin and now works as an employee at Quality Pork Processing.

For six years, Gebray worked in town and started the process of becoming a naturalized citizen. It took a year and a half, but eventually, Gebray found himself proud of his accomplishment.

“There was a lot of stuff (that happened in my country),” he said. “When I became a U.S. citizen, I felt very good.”

The process for becoming a U.S. citizen is expensive, and sometimes lengthy, said Sarah Karki, director of the Immigrant Law Center in Austin. For those wanting to come into the U.S., they must obtain a green card. However, even receiving a green card, they need to meet a minimum five year waiting period before being able to apply for citizenship. Even after applying for citizenship, they need to pay a filing fee of $725, which was a significant increase in price from $100 years ago.

Even the naturalization process takes some time, as applicants need to pass a civics exam as well as prove they are proficient in basic English reading, writing and speaking. For some it takes longer to finish the process of becoming naturalized.

Through her work with the Immigrant Law Center, Karki has witnessed numerous students becoming American citizens and felt proud of their progress. Last year, the center helped 6,000 people statewide in the naturalization process.

“We help with citizenship and with that, we help refugees who were countryless all their life and helping them reach the end of their journey by becoming U.S. citizens,” Karki said. “It’s really cool to see that, and it’s not at all an easy journey to achieve that.” 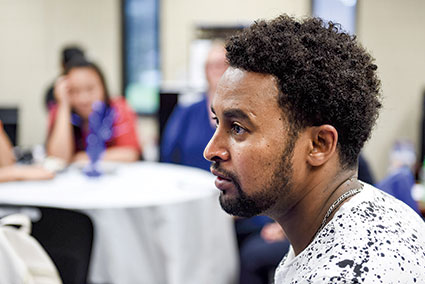 Eyasu Gebray introduces himself during a citizenship celebration Wednesday at Riverland Community College. The event was part of Welcome Week activities.
Eric Johnson/photodesk@austindailyherald.com

‘I want my children to not grow up with worry’

Whatever it takes, a mother wants protect her children and to give them the best shot at reaching their dreams.

Maylary Apolo came from Thailand after having lived in a Karen refugee camp. During that time, Apolo needed to protect her five children from the ongoing political insurgency that was caused by the 8888 Uprising in Burma (Myanmar), which took place starting on Aug. 8, 1988, where a series of nationwide protests, marches and civil unrest were initially started by students against the totalitarian regime in the government. Yet, those protests ended in September 1988, when a military coup massacred thousands of people when martial law was called to contain protesters.

Many refugees fled to Thailand, Bangladesh and Malaysia and sought protection from political repression, natural disasters and poverty.

One of those people was Apolo, who ended up at a refugee camp with her five children. For years, she dreamt of her children obtaining a college education and escaping the violence that caused fear in many. She didn’t want them to live in uncertainty, and constantly “worrying” about whether they would wake up to see the next day.

The greatest thing that Apolo dreamt for her children was to obtain college educations and not grow up in an environment where they need to constantly fear for their lives and never think about the future where they could live in peace.

“I wanted my kids to get out of this situation,” Apolo said. “The situation was not safe. I was worried that they would attack the village. My youngest child at night would tell me he was very scared. It was a nightmare, because we had to worry about safety, and I didn’t want them to grow up with worry.”

Apolo’s family came to the U.S. in 2008 by first living in South Carolina. For three years, she lived there as a resident and then eventually moved to Worthington, Minnesota, in 2011. In 2017, Apolo and her children came to Austin, where she now works at the Immigrant Law Center.

After receiving her green card within a year of coming to the United States, Apolo needed to wait another five years before being able to be eligible for applying for citizenship, which Apolo eventually became in 2015. She recalled the first years of living in the country, having worked her first job at Chick-Fil-A and barely knowing any English.

Being able to see her children, who are attending college at Riverland and receiving an education, Apolo felt that her journey to this country was well worth it and that she can now see her dreams fulfilled.