Southland’s Novell Jackson, left, and Harrison Hanna did not play a single snap for the Southland football team last season, but both have emerged as leaders this fall. Rocky Hulne/sports@austindailyherald.com

ADAMS — When the No. 3 ranked Southland football team needs a big play, it turns to a pair of players of who were not even on the field for the Rebels  one year ago.

Sophomore quarterback Harrison Hanna, who missed all of last football season with an ACL injury, has quickly found his favorite target in junior wide receiver Novell Jackson, who moved to Dexter from Devils Lake, North Dakota this year.

Hanna has thrown for 454 yards and four TDs this fall and Jackson is responsible for 287 receiving yards and four scores as he has averaged 23.9 yards per catch.

“I always sort of look at (Jackson), because I know he’s quick and he’s fast,” Hanna said. “He’s usually open most of the time. It didn’t take us long to get a rhythm. We’ve been getting routes in throughout the season and we’ve developed a really nice chemistry.”

Jackson is originally from North Minneapolis, but he moved to Devils Lake when he was 13-years old. He has quickly warmed up to his Southland teammates as the Rebels welcomed him with open arms. 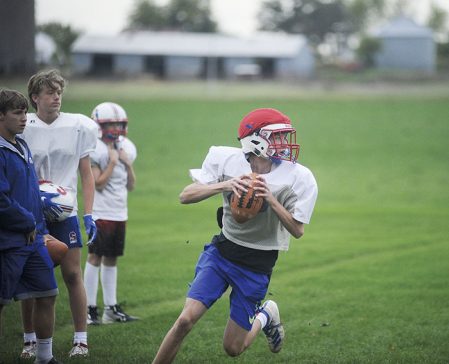 “They’ve been great. They’re kind of like a second family to me,” Jackson said. “We have good chemistry and I love playing foot  ball with them.”

Jackson, like all of his Southland teammates, had never played nine-man football before this season, but he’s learned to adjust his routes for the narrow field. Learning that and a new offense has been a little difficult for Jackson, but it hasn’t slowed him down as he also plays a key role as a defensive back for the Rebels.

“It’s a new experience, but I like change. It’s been fun getting to know a new offense and some new teammates,” Jackson said. “It’s been kind of hard to adjust my routes, but Harry throws a great ball. It’s not hard at all to catch.”

Hanna noticed Jackson as soon as he stepped on the practice field this season and he immediately began scheduling throwing sessions with him.

“Once we saw him, we were kind of like ‘woah, he’s a big kid and a big athlete,’” Hanna said. “We welcomed him and I feel like he fits in real well with our team.”

Southland head coach Shawn Kennedy said that his team had solid depth at wide receiver, but Jackson’s presence as a deep threat has made things easier on everyone.

“Novell’s a great kid, he’s a hard worker, he’s very positive and he’s very respectful,” Kennedy said. “We’re really blessed to have him. Harrison is young and inexperienced, but he’s just a natural. He throws a great ball.” 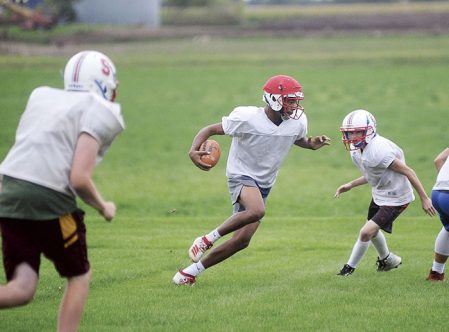 Novell Jackson carries the ball after making a catch in practice in Adams Wednesday. Rocky Hulne/sports@austindailyherald.com

LeRoy-Ostrander and Southland are just 12 miles apart along Highway 56, but when they kick-off at 7 p.m. this Friday night it will be a new matchup as the Rebels made the move from 11-man to nine-man football this season.

The teams are close in distance and also close in other ways as Southland head coach Shawn Kennedy has been hired as the athletic director at L-O this year.

“I’m getting to know those kids and the coaching staff real well over there (at L-O) and we get along real well. At the end of the day, we should embrace this game and have fun,” Kennedy said. “It’s a game and sportsmanship always needs to be important. I have it better than everybody because I have a wonderful group of Southland kids that I get to be involved with and a wonderful group of LeRoy kids that I get to be involved with.”

“We know they’re a big, tough team. It’ll be a good match-up,” Hanna said. “We’ve just got to have fun and try our hardest. This will be one of our toughest matchups of the year and we’ve got to come prepared, physically and mentally.”

Kennedy credited the Cardinals and their coaching staff, and he’s also looking for the Rebels to continue to show improvement.

“You can’t coach what Chase (Johnson) does as a quarterback (for L-O), because he’s so mobile. (Riley) Olson is a great receiver, (Tanner) Kasel is an incredible blocker and Carter Johnson is just a beast,” Kennedy said. “This is only game five. We all know that we’re a work in progress and we can only get better. If we didn’t have any improvements to make, we’re in trouble.”

Hayfield volleyball team drops a close one to Triton