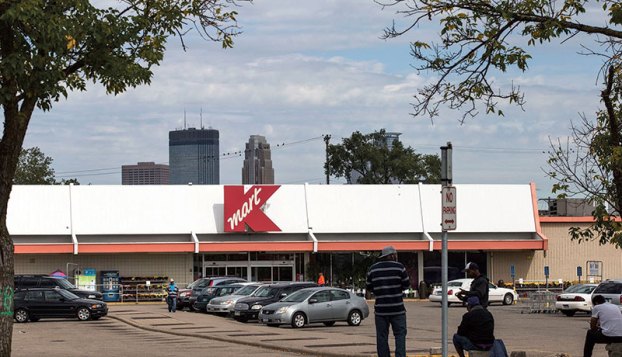 The Kmart along Lake Street in Minneapolis, seen here on Sept. 28, 2017, will be the last Kmart in Minnesota after two other stores close later this year. Ellen Schmidt/MPR News

Minneapolis Kmart will be last in Minnesota; Company to shut down St. Paul and International Falls stores

Kmart will soon have just one store left in Minnesota.

TransformCo, which owns the struggling retail chain, said it will close Kmart stores in St. Paul and International Falls by the end of the year.

After those stores close, the only remaining Kmart in Minnesota will be the one on Lake Street in Minneapolis.

In a statement, TransformCo spokesman Larry Costello said, “after careful review, we have made the difficult but necessary decision to close the Kmart stores in St. Paul and International Falls.”

Liquidation sales will likely start within a few weeks, with the stores closing by mid-December.

A Kmart store in Fargo, North Dakota, also is set to close by year’s end, the Forum newspaper reported.

Earlier this year, TransformCo paid $5.2 billion for about 420 Sears and Kmart stores and other assets of the retailers’ parent company.

The stores’ new owner has announced the closing of dozens of stores.

Several Kmarts in Minnesota were shuttered in previous rounds of store closures in the past few years, including a location in Rochester earlier this year.

Sears has no department stores left in Minnesota, after its Mall of America location closed earlier this year.

Woodstock? Nope. This fest was in Prairieville, Louisiana