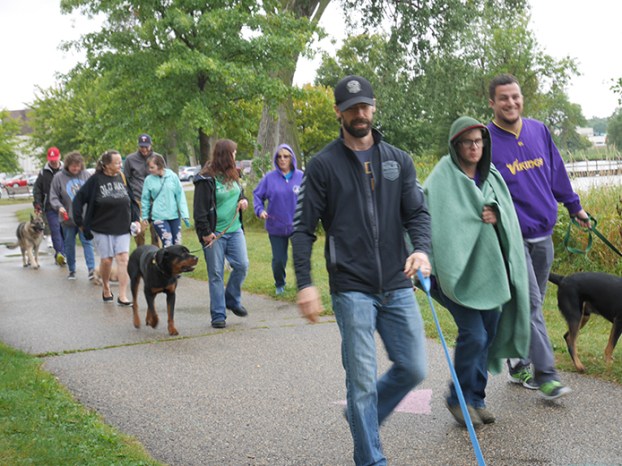 The Mower County Humane Society would like to extend a huge thank you to all who came to our Walk for Animals event on Sunday, Sept. 8, 2019! The weather did NOT cooperate, but the generosity of our supporters more than made up for the rain – $8500 has been turned in to help support MCHS in its mission to rescue abandoned pets. MCHS is an all-volunteer group, so 100 percent of the money raised will be used to get cats and dogs ready for adoption.

Thank you to Roo and Clara Yori for coming to lead the walkers and to tell us about Roo’s appearances on TV’s “American Ninja Warrior.” MCHS and Roo connected when he and NBC approached MCHS to film an introduction of Roo for his appearance on American Ninja Warrior. Roo and Clara have rescued many dogs – one of several is Wallace, a pit bull who has subsequently had a book, “WALLACE,” written about him and has the Wallace the Pit Bull Foundation established in his name. Thank you, Roo, for the autographed copies of “WALLACE” you gave to all who attended.

The Mower County Humane Society wishes to extend an invitation to all to come to “Cakes and Cars for Critters” on Sunday, Sept. 22, at the Austin Eagles Club. We will be serving pancakes, having a bake sale, vendor sale and a CLASSIC CAR SHOW! The event will kick off at 9 a.m. Hope to see you there!

By Roger Boughten Unsung heroes are those who make a real difference in the shadows of the community. They are... read more