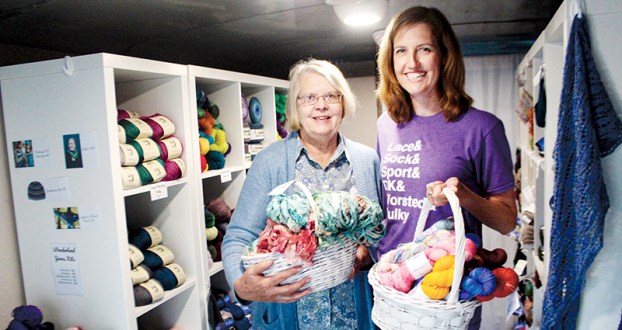 Debbie Duoos, left, and her daughter, Lindsey Williams, both own the YarnMobile, a new traveling business that sells quality yarn and knitting supplies from a truck. Since there were no yarn stores in the region, the mother-daughter duo decided to hit the road to meet the need.   Photos by Hannah Yang/hannah.yang@austindailyherald.com

Lindsey Duoos Williams and her mother, Debbie Duoos, started a business together by finding a common thread—knitting.

The Austin women started up their business called “The YarnMobile,” which recently debuted at the Austin ArtWorks Festival in late August.

A traveling yarn store, customers can walk up the steps and enter a small traveling boutique on wheels, with shelving stocked with a wide collection of yarn made from various materials and displayed vibrant colors. Eventually, there are hopes that solar paneling can be installed on the roof so that lighting inside the truck would improve. 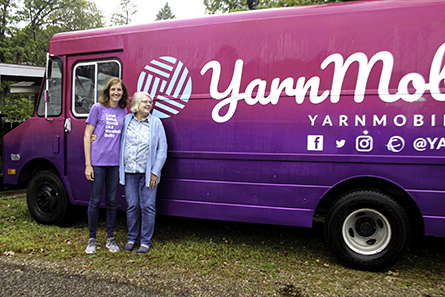 Lindsey Williams, left, and her mother Debbie Duoos, right, started a mobile truck business together called The YarnMobile.
After the two shared a passion of knitting and crocheting, they wanted to eventually open a yarn shop that caters to the knitting community, and provide high-quality yarn as well as needles to southeast Minnesota and beyond.

While growing up, Duoos said that she had taught her daughter how to knit, and eventually the two dreamed about opening a yarn store together.

It was when they noticed that there was not one yarn store in southeast Minnesota and that they wanted to meet that need by selling high-quality fiber yarns in vibrant colors that many won’t find in typical retailers.

“I mean, big box craft stores sell lower end yarns, and don’t carry a lot of natural fibers,” Duoos said. “They won’t carry cashmere or alpaca, it’s mostly acrylic yarn. I mean, if you want to make a sweater, you want it to be soft and cozy. Acrylic yarn, it tends to squeak when on the needle and you can hear it. There’s so many beautiful yarns that are available that didn’t exist back then when I was a teen. It’s just fun to have something in your hands in the digital age and creating something.”

The two knew there was a hole in the market for good quality yarn made from natural fiber as well as being hand-dyed locally. While many big-box craft stores carry yarn, there may be some selections that aren’t that readily accessible. It’s more common to see acrylic yarn in the craft retailers, but it’s highly unlikely they’d be carrying alpaca or recycled yarn made from old clothes.

Williams works full-time at Riverland Community College as the theatre instructor, so having a traditional brick and mortar store with regular hours would make things difficult. The YarnMobile, being a mobile business, allowed for more flexibility in her schedule. Although there aren’t set operating hours for the YarnMobile, those interested in shopping there can follow the track of the YarnMobile on its website. For instance, the truck is set to appear at SuperFresh this Saturday from 9 a.m. to 4 p.m. for its grand opening event. 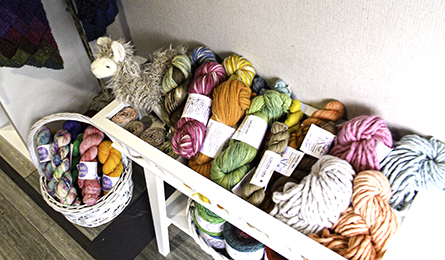 The YarnMobile carries a variety of yarns made from natural fibers like alpaca and recycled saris. Many of these yarns were created and spun by local artists, as well as being hand dyed.

“If it was a traditional store, then I’d have to close it whenever I wanted to take a break,” Williams said. “This way, I can do it on my own time.”

Hitting the road, the YarnMobile is a traveling business on wheels, similar to the operations of a food truck. Mobile businesses have been seeing a boom recently, as there’s less expenses to pay for in comparison to a traditional brick and mortar store, Duoos said.

“I saw a taco truck in Cambridge, and that stuck with me,” she said. “You probably couldn’t find a yarn store in Rochester, Owatonna or Albert Lea. Some people have come all the way from northern Iowa because there aren’t any yarn stores there.”

It’d be pretty hard to miss the YarnMobile if it drove by. A brightly colored purple and pink ombre truck with its name boldly written on the side draws groups of knitters to enter wherever the truck may be parked. The vehicle was originally a traveling clothing boutique from Arizona and was renovated to become the YarnMobile’s storefront, with retractable tents to create an awning where checkouts can take place during inclement weather.

When not out on the road to be a vendor at an event, the YarnMobile also sells products online, opening in Spring 2019. Duoos and Williams have already received an influx of customers ordering yarn from all over the United States, some coming as far as Florida to purchase some of the inventory from Duoos and Williams.

For those wondering, the YarnMobile is dedicated to bringing fun to southern Minnesota and northern Iowa and promotes sustainable business practices, local products and crafters and showcasing diversity of fiber arts. 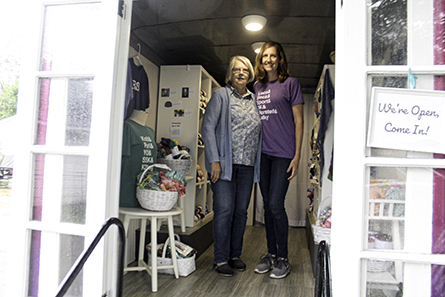 Debbie Duoos, left, and her daughter, Lindsey Williams, both own the YarnMobile, a new traveling business that sells quality yarn and knitting supplies from a truck.

Despite younger generations growing up in the digital age, there hasn’t been a decline of knitters. Rather, the exact opposite.

From statistics gathered by the Association for Creative Industries, 28.8 million Americans participated in knitting or crocheting in 2016, and represented a market of $2.79 billion, with an average monthly spend per household of $20.57, according to the most recent data available.

The study also indicated that knitters and crocheters were likely to also participate in other needle arts, 77 percent buy their supplies in a physical store, four percent buy outside physical stores and 19 percent buy from both. Two percent give items they create as gifts, but knit and crochet items were the most commonly donated crafts at 18 percent. More than 58 percent also keep their own creations.

The Association for Creative Industries also noted that 18 percent consider themselves experts, which is one of the highest percentages of any craft, while 82 percent rate their skills as beginner or intermediate. Seventy-one percent of knitters and crocheters were female, 29 percent were male, and 37 percent had a full-time job.

Knitting and crocheting age ranges were fairly even. Thirty-four percent were from 18 to 34, 36 percent were 35 to 54 and 30 percent are 55 and older. 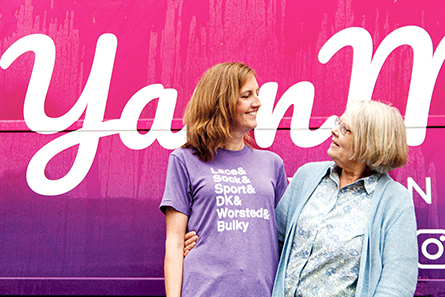 “You can find groups of knitters in the oddest places,” Duoos said. “I remember reading about a big burly football player knitting on an airplane, and knitting is big in theatre groups.”

However, this didn’t surprise Williams or Duoos. Having a hobby like knitting is something that younger generations are intrigued by and slowly come to appreciate as a way to destress.

“There’s a lot of time to kill backstage,” Williams added. “So, they pick it up, and are able to knit while listening to what’s happening on stage. It’s been a really productive knitting boom within the last decade and there are a lot more younger people in diverse audiences seeking to knit.”

Eventually, Williams and Duoos hopes to host knitting classes at the Austin Public Library and teach beginner knitting classes to those interested and perhaps some advanced skills classes for those wanting a challenge. While being booked for parties and other events, it’s clear that no matter where they go, yarn has a way of connecting communities together.

“I love it when people find something they like about knitting and create,” Duoos said. “That’s my favorite thing. There’s something for everyone.”

For those looking to have their voices heard regarding the preliminary levy, a date has been set for them to... read more