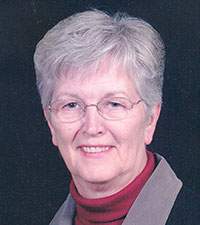 JoAnn was born on Oct. 10, 1931, to Conrad and Hazel (Helgeson) Halverson. She grew up in Taopi, Minnesota, and graduated from Adams High School. She married Virgil Underdahl on April 16, 1950. Virgil was in the U.S. Air Force, which meant that they got to live in many different places. They lived in California, where their daughter was born. After that, Virgil got stationed at Yokota Air Force Base near Tokyo, Japan. They lived in Burnsville, Minnesota, for about 20 years. JoAnn worked for Universal Cooperative for 25 years. After retirement, she volunteered at Fairview Ridges Hospital. After that, they moved to Northfield, Minnesota. JoAnn enjoyed reading, sewing, knitting, and walking her dog, Jonny. She also had a love of horseback riding, going to Bible study and singing hymns. Most of all, she loved spending time with family and friends.

A celebration of life will be held at 11 a.m. on Friday, Sept. 27, 2019, at Bayview Freeborn Funeral Home with the Rev. Don Malinsky officiating. Visitation will be held for one hour prior to the service on Friday at the funeral home. Burial will be in Graceland Cemetery in Albert Lea. Online condolences can be left at www.bayviewfuneral.com.