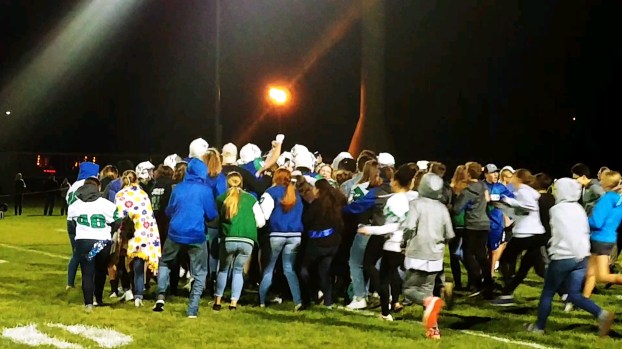 Hulne: Lyle-Pacelli football team has a lot to smile about

LYLE — You’ll have to excuse the Lyle-Pacelli football players who showed up with a big smile on their faces at school Monday morning. After all, they were still trying to soak up what had happened on Friday night.

The Athletics snapped a 32-game losing streak when they scored a 30-18 win over Mabel-Canton on Homecoming last Friday night. It was M-C that started L-P’s skid with a 73-26 win in 2015.

The Athletics’ drought of wins saw the team struggle with numbers on the roster and on the scoreboard. LP was outscored 1,639-402 over that stretch, the team had just two contests where it was within 10 points, and the Athletics forfeited their first round playoff game last year.

Needless to day, it was an uphill battle for first year head coach Brad Walter to steer LP back on track this fall.

“I think we had a lot of good football players that weren’t playing. We went around and recruited kids. We had to convince them that if they went out, we could have a pretty good team,” Walter said. “I think (getting a win) is huge. We felt like we felt really good in the last three weeks. We showed signs we can play with some of the best teams in the state and if we can play with them, we can play with anybody. Now hopefully we can move forward and keep building.” 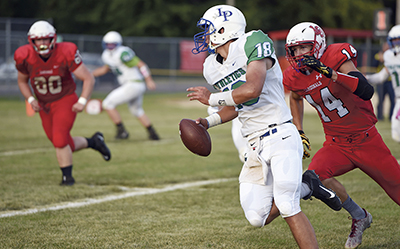 Lyle-Pacelli junior quarterback Jed Nelson has taken a lot of hits over the last three seasons, but he’s continued to get back up every time.

“I just love football. I feel like if the people who aren’t playing in our school see me playing, maybe that will encourage other kids to play,” Nelson said. “It was fun looking up at the scoreboard (Friday) and seeing that we won. It was crazy. Fans were on the field. It’s been a lot of work. I’ve got to push my teammates to be better.”

“We never really knew what it felt like to win,” Bollingberg said. “At the end of the game, we were running around and we didn’t really know what to do. We believed every week that we were going to put up a fight and win. Now we feel we can get a couple of more wins and maybe even win out. That would be a big step for the program.”

Junior linebacker Isaiah Clennon has been a varsity football player since he was an eighth grader and he said he never lost faith that the Athletics could pull out a win.

“We just kept our heads high,” Clennon said. “We kept practicing hard and we stuck with it. We stuck together as a family and we rode it out.”

Just when the area might have found a little break from the wet season, Mower County will be under a... read more