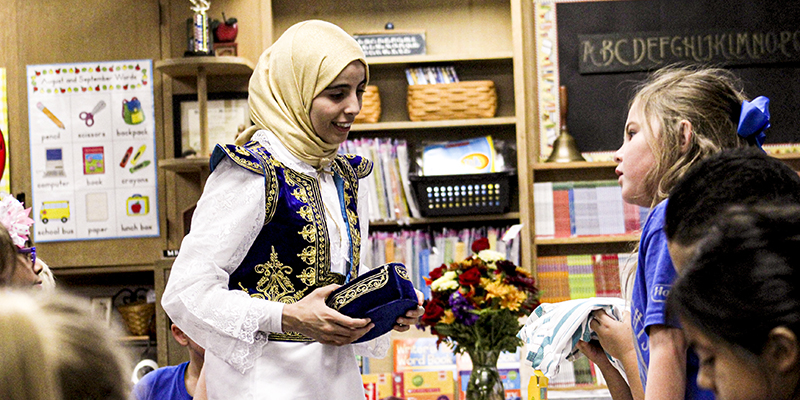 Ines Rahmouni of Tunisia, shares with Neveln Elementary School second grade students different articles of clothing that make up a traditional Tunisian wedding garment. Rahmouni was one of the presenters for Global MN, which seeks to develop international connections with schools statewide. Hannah Yang/hannah.yang@austindailyherald.com

Friday marked the second year that Global MN visited Austin Public Schools and had several people from various different backgrounds come and present to the children.

Last year was the launch of the Global MN program in Greater Minnesota, with APS being the first district that the organization partnered with by having its corporate partners at Hormel Foods connect the schools with Global MN.

As Austin Public Schools continues to grow in its diversity, the value of Global MN’s educational programming is crucial for students to learn more about the world and the different people who live in it.

“It’s a really good opportunity for those who are sharing their cultures with our students,” said Neveln Principal David Wolff. “This is a great program for everyone. When we first did this last year, we weren’t sure what this program would look like, but after receiving student feedback, it was a lot easier to plan the second year around. We asked students ‘what did you learn?’ and that provided us with some insight.”

The three countries represented during Friday’s presentations were Tunisia, Pakistan and Ghana. Throughout the day, Neveln teachers and students had the presenters come into the classrooms, where they listened to the various stories the people brought with them. Then, everyone participated in an activity related to their culture.

“I think it was received very well today,” said Tim Odegard, Global MN program director. “One of the things that was important to us was bringing diverse adults with different perspectives, and see a greater diversity of role models. We’re looking to celebrate our differences, and sparking positive connections.”

Global MN had its origins in the Twin Cities metro area and had its organization reach 107 classrooms last year (majority being in the metro area), but is slowly expanding into Greater Minnesota. Last year, APS was the first district outside of the Twin Cities that Global MN reached, and this year, it’s also expanding into St. Charles within the southeast Minnesota region.

“Here in APS, the community has already been steeped in diversity,” Odegard said. “This program would have a different impact in schools with less diversity. Here in Austin, we’re not introducing this concept and we see that the community has success. It speaks volumes about the school district who shares our mission of intercultural understanding that’s integral for the success of this program.” 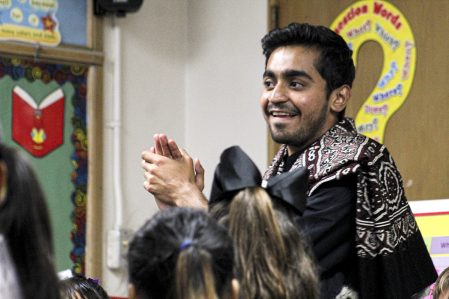 Inside Maria Mickelson’s second grade classroom, the students were getting a lesson on how to greet each other in Urdu, the national language of Pakistan.

“As-Salam-u-Alaikum,” Abdul Saboor instructed the class. This greeting may vary in dialect and accent depending on the region in Pakistan, but it means the same thing: “May peace be upon you.”

“As-Salam-u-Alaikum,” the second grade students responded back. They turned to their partners and greeted them in Urdu and shook hands. There were giggles, but students were curious about learning another language.

Saboor and Ahmad Raza, both cultural exchange students through the University of Minnesota, came from Pakistan to share their heritage with Americans. For them, they learned just as much about the American culture through the children they’ve met, as much as the children have learned from them.

For the presentation, students learned about where Pakistani children went to school and the uniforms they have to wear in their classes. They learned about the different types of ethnic foods the people in Pakistan enjoyed and found similarities in several dishes to some of their own favorite meals eaten at home.

“They learned what we eat for breakfast and they learned how to dance,” Saboor said. “We find that when children learn this in school, this information will stay with them and remains in their mind.”

During their presentations, the two men had students color the Pakistan national flag as well as participate in dancing some traditional Pakistani dances. Students and Mickelson got onto the carpet and jumped alongside Saboor and Raza. Throughout the classroom, there was laughter and students were excited about getting a chance to dance.

“The students were really engaged,” Raza said. “They were excited to keep paying attention to our lesson. We found that comparing our country’s customs to theirs, they find that we’re pretty similar.”

As students go about their school day, Saboor and Raza both hope, that the children could teach a lesson to adults about being open minded to each individual child’s way of learning.

“You cannot expect a fish to fly and a bird to swim,” Saboor said. “It’s just the same as we don’t expect a child to learn the same way as another child. They are all different.”

Passing around special garments that the Tunisian people wear, Ines Rahmouni and Rahma Hamdani both shared their experiences and information about their home country and what it’s like living there with Brenda Hackensmith’s second grade class.

For activities, the children had to guess whether statements about Tunisian weddings were true or false, and some had the chance to try on the various articles of clothing that was brought to the presentation. From hats to scarves, and even some jewels, the children were fascinated by the colorful pieces of clothing and felt the textures of various fabrics. Some even got to see some coins that were part of the Tunisian currency.

There were moments throughout the day when Hamdani and Rahmouni encountered questions that were rooted in stereotypes and misinformation. They took their time answering whatever inquiries the children had about their perceptions of Muslims, and cleared up any misconceptions they might have learned somewhere else.

“We found that a lot of their questions were based on stereotypes,” Hamdani said. “However, this gave us the opportunity to talk to them and give them an idea of what our culture is about, and understanding the different perspectives that we have.”

Although Hamdani and Rahmouni are both Muslim, Rahmouni wore a traditional hijab on her head for religious purposes, while Hamdani did not. Despite practicing the same religion, they shared that there was diversity within the Muslim community as well and the freedom to make their own choices about whether they wore a hijab or not.

“In Tunisia we have total freedom and wearing a hijab is a choice,” Rahmouni shared. “In Islam, it is required to wear a hijab, but no one is going to force you to wear it and many religious groups live in Tunisia like Christians, Muslims and Jews. However, we all live in peace there.”

As the students donned the traditional headdresses and enjoyed seeing what a traditional Tunisian wedding would look like, Rahmouni and Hamdani felt that any gaps of information that the children may have had prior to their visit were already getting filled.

“We want them to know that our country lives in peace and we have great women’s rights,” Rahmouni said. “We just recently had our presidential elections and things are going very smoothly. If they have questions, we answer them.” 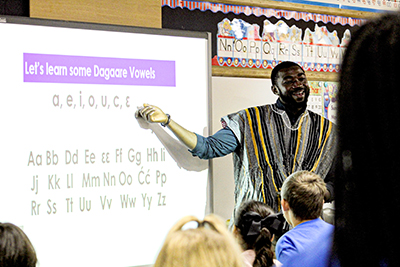 Gabriel Maanibe, office manager at Global MN and Ghana native, pronounces the Dagaare vowels with Neveln Elementary School students. He is part of Global MN’s educational programming where the organization seeks to connect international communities with districts statewide and opening up cultural experiences in the classroom.
Hannah Yang/hannah.yang@austindailyherald.com

During the day, Gabriel Maanibe was able to interact with second graders in Janene Lunning’s class.

The Global MN office manager told stories of what it was like to attend school in Ghana and what traditional foods the people enjoyed. He brought out a small, traditional drum that students drummed on if they managed to finish coloring the Ghana flag in with its three colors first: red, green and yellow.

Maanibe taught students how to sound out the Dagaare vowels that the Ghanaian people use to speak to one another. He felt compelled to answer questions that the children may have had about Ghana and found that their inquisitive nature brought about interesting dialogue about their perceptions of Africa.

“I was kind of asked intriguing questions such as if we had running water,” Maanibe said. “These sorts of questions normally would be laughable and shallow, but these were innocent questions the children had. I took that as an opportunity to teach them. These were questions that were beyond their level that we don’t even think about. Adults at my level could be asking questions about the water supply issues other communities may have.”

He showed pictures of Ghanaian children in school uniforms and similar haircuts that were cut very short. He explained to the Neveln students that it was mainly for hygiene purposes; otherwise, these children were just like them.

“I want them to know the world is the same, just different environments,” Maanibe said. “The thinking is the same, we just have different perspectives.”