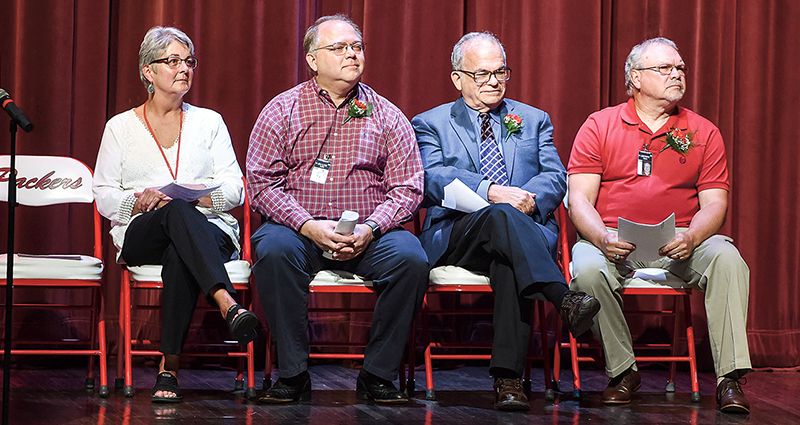 As Homecoming Week continues to bring Austin High School spirit to the district and the community, it also gives alumni a chance to remember their roots many years later.

Knowlton Auditorium was packed with students, staff and community members, who arrived to honor the recipients of the Distinguished Alumni Award on Thursday morning.

A tradition that has been ongoing for 18 years — having first been established in 2002 — the Distinguished Alumni Award honors recipients who contributed to society in an exemplary manner, achieved outstanding success in business, a profession, the arts, humanitarian efforts or community service, and also serves as a positive role model for students.

“AHS has a wonderful tradition of honoring alumni who have made a positive impact through their service for others,” said Principal Andrea Malo. “These are people who have taken their education from Austin High School and made the world a better place, and using their experiences from here as a springboard for their accomplishments.”

For the first time in almost 15 years, three people were chosen to be recipients of this year’s Distinguished Alumni Award, the last time was in 2005.

“This year’s group was amazing,” said Jeni Lindberg, chairwoman of the AHS Alumni and Friends Association. “The committee comes together and discusses the nominations, and picks from the group. When I call the winners, I give them free reign about what they want to share with students. It’s always inspirational to hear their messages for the students.”

Standing on-stage was Thomas Napp, Dr. Duane Napp’s son, who came to Austin to accept the award on his father’s behalf since he was unable to attend the ceremony.

Duane is suffering from muscular degenerative disease that left him in a wheelchair, and so, was unable to travel because of his condition. Thomas explained to students, and he was apologetic that he wouldn’t be able to meet with the students in person.

Thomas spoke about his father who graduated from AHS in 1951. That was the year when Austin beat Rochester (there was only one high school then) during the Homecoming game 46-0, was a trumpet player for the band and was part of the Latin Club. There were only 292 graduates in his senior class.

Duane attended Austin Junior College (now Riverland Community College) where he graduated in 1953. He went onto the University of Minnesota, where he earned his bachelor’s degree in natural science, majoring in chemistry and minoring in both physics and math.

A retired college chemistry professor and IBM engineer, Duane generated multiple patents throughout his career, including with IBM, where he directed and managed critical projects to assure the introduction of new technology. He received an invention achievement award from IBM in 1986, related to component self-alignment as well as being a recipient of the National Science Foundation Summer Institute Award, and earned a faculty fellowship.

During this time, he was assisting in research and studies that assisted the space race against the Soviet Union.

However, academia was important to Duane, who taught high school and college chemistry courses before his time as an engineer at IBM. After that, he never returned to teach.

Throughout his life, Thomas said his father emphasized that education must be held as one of the most important things a person can have. While making mistakes is expected, his father said that life was a continuing learning experience, and to find a path that fulfills them and the lives of people around them.

“I’m honored to accept this award on my father’s behalf,” Thomas said. “Utilize your skills and talents to the fullest potential. Never fear making a mistake, but learn from them.” 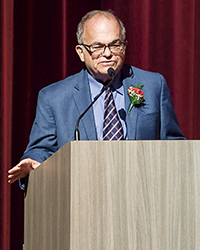 A lot was happening during the year of 1958, when Meier Wolf was a senior at AHS.

It was the year that NASA was created, and gas was only 23 cents per gallon. The Barbie doll and hula hoops were introduced and the microchip was invented. His graduating class at the time consisted of 362 students.

Wolf indulged in his memories of being a student from Sumner Elementary School and having spent his days walking down the hallways at AHS, especially when Austin defeated Owatonna 20-0 during the homecoming game his senior year.

“I’m a product of Sumner school,” Wolf beamed. “Here, I’ve always learned something, and it speaks to how the education here in Austin is so strong. Being back here brings back a flood of memories.”

A retired attorney for the U.S. Department of Housing and Urban Development (HUD), Wolf received awards from the U.S. Congress, the state of Maryland and other government agencies for his achievements, which included serving as a legal advisor to grant programs that improved communities around the country and Puerto Rico. Wolf also served as mayor for Chevy Chase, Maryland, where he still lives and continues to be an active volunteer within the community.

During his career, the Austin alumnus said he had his share of disappointments and missteps. However, he kept going after remembering to focus on serving others to the best of his ability.

“There were a lot of disappointments along the way,” Wolf said. “But, I went and served the communities in the best way possible.”

For students, Wolf wanted them to be inspired and to educate themselves on the issues that matter to them and to spark change through their words and knowledge that was obtained. Citing examples of the Parkland students who organized a massive movement nationwide to support stricter gun safety laws after surviving a mass school shooting in 2017, and Greta Thundberg, the 16-year-old teen from Sweden, who is a leading figure in an international call for politicians to address solutions for climate change and is now a Nobel Peace Prize nominee.

He believed that the youth today has the capability of promoting their causes and making the world they live in a better place, and said that though they may have been looked down upon for their age, it was important for the older generation and youth to come together and learn something from each other.

“These students, kids were your age,” Wolf said. “Seniors and youth are more aligned than they think and we should be working together. Our success is measured by our humanity, as much as our careers.” 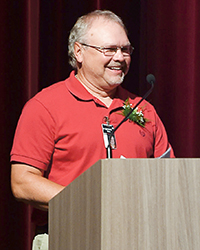 The kid who fell asleep in class, drooled on his desk and was an average student walking down the hallways at AHS, would eventually be leading multiple sports teams to state tournaments during his coaching career.

That was the story of Dennis Bray, a former AHS girls varsity hockey coach from 1997 to 2013, and came from a class of 526 graduates. Austin that year lost to Albert Lea, 24-16 during their Homecoming game, to which the audience in Knowlton booed.

Funny thing was that Bray didn’t know how to skate at first. He instead, was annoyed by his younger brother who was talking about youth ice hockey non-stop. Eventually, Bray ended up trying out the sport himself.

“I was really irritated,” he told the audience. “Unfortunately, I caught the hockey bug. I fell in love with the sport. Despite getting knocked down a lot, I loved hockey.”

Bray learned to ice skate at 14, when other teens had already been skating since they were toddlers. Though he admitted that he wasn’t very good, he kept up with practicing and found that he loved the grit, hard work and sweat that went into performing at optimum levels.

He eventually tried out for the boy’s varsity hockey team at AHS, and anxiously awaited for the team roster to be posted after tryouts.

“I walked up to the board and read the list,” Bray said. “My name was on it.”

Practices and games were held outdoors in the frigid cold during a time where there was no ice arena for the teams to skate and compete on since Riverside Arena was constructed in 1974. There were no zambonis smoothing the rink, so whoever scored the least amount of points during shootouts would need to sweep and shovel the ice themselves. The team would go to Albert Lea for practices that ran from 10:30 p.m. until midnight, provided the ice stayed frozen solid enough to support players.

“I ended up shoveling a lot,” Bray said while the audience laughed. “I learned about motivation through defeat, and despite it all, I loved it all.”

Years after graduating from AHS, Bray served as union president during his 36-year career as a machinist at International Paper in Austin. He coached the AHS varsity girls hockey team from 1997-2013, was inducted to the Minnesota Girls Hockey Association Hall of Fame and was named Big 9 Coach of the Year and Section 1A Coach of the Year.

Among other accomplishments, Bray also coached teams that were Section 1A champions, going on to the Minnesota State Girls Hockey Tournament in those three years. He was a former member of the United Way and is a community volunteer.

“Not bad for being someone who didn’t know how to skate,” Bray chuckled. “To be a good coach, I knew that you had to be someone who was invested in their students and cared about their players. As a teacher, I said ‘you learn from me and I learn from you’. I was a counselor to my players, and let them know that the door to my office was always open to whoever needed me.”

As Homecoming 2019 approaches the end, the lifelong coach wanted to pass along some important messages to the current students as they go forward in their lives.

“Do not educate your mind without educating your heart,” Bray said. “No matter who you meet, they deserve respect. They are trying to make it too. Go out there, and do great things.”

All Fired Up: Battle of Connects takes over AHS