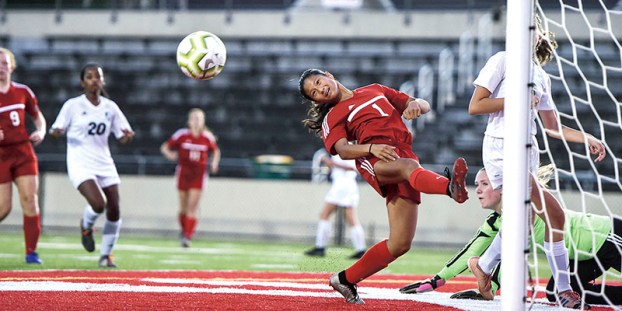 Austin’s Sarah Wangen just misses on a blistering cross against Faribault in the first half Thursday night in Art Hass Stadium. Eric Johnson/photodesk@austindailyherald.com

Finding the will: Austin girls find their scoring drive

The Packers are growing more and more familiar with finding the goal and that’s led the Austin girls soccer team to back-to-back wins after it topped Faribault 4-2 in Art Hass Stadium Thursday night.

Austin (4-5 overall, 3-3 Big Nine) piled on 24 shots on goal in the win, leading to a  3-0 lead at halftime after Eliana Bentley, Grace Mayer and Morgan Raymond all scored within a 15-minute spurt. The Packers have now scored 16 goals in nine games after scoring just 10 goals in 17 games last season, when Austin finished 2-14-1 overall.

A lot of Austin’s big scorers played a lot last season, but they have learned to be more aggressive.

“It’s really based on saying ‘it’s OK to be greedy, because when you score, the team scores,” said Austin head coach Jake Levisen. “We have to make the imperfect shots perfect and they really took that to heart his year. They’re not going to wait for the perfect shot anymore.” 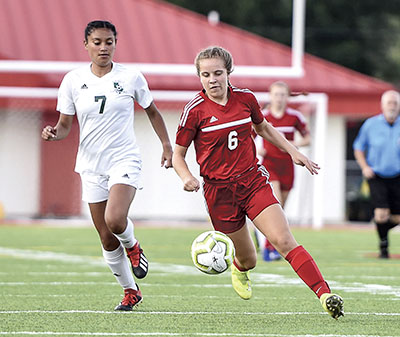 The Packers kept the intensity up throughout the night as they controlled possession from the start.

“We had a lot of good passing and we had a lot of through balls. Working our away through their defense really helped us,” senior midfielder Emily Bollum said. “We’re just looking at each game individually and seeing what we can do to keep adding those wins up.”

Bentley scored her first-half goal on a hustle play as she rebounded her own miss to find the back of the net. The junior forward has seen her confidence grow by leaps and bounds this fall. 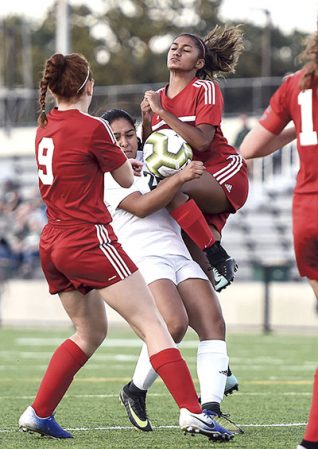 Austin’s Salma Masood goes high for the ball during the first half against Faribault at Art Hass Stadium. Eric Johnson/photodesk@ausitndailyherald.com

“I’m getting more comfortable,” Bentley said. “I think we’re working as a team more instead of as individuals. We’re making good passes.”

Levisen said the Packers have started to crank up the intensity in practice and that has shown up on game nights this week.

“We had a good talk on Monday and we used the momentum from Tuesday’s win,” Levisen said. “We’ve got to practice hard and that’ll make us better. That friendly competition that happens daily in practice is now starting to show itself on the field. It was beautiful to watch.” 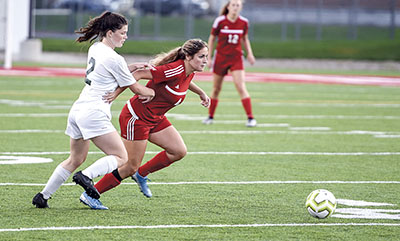 Austin’s Ariana Shapinsky tries to break away from Faribault’s Ainsley Howells in the first half Thursday night at Art Hass Stadium. Eric Johnson/photodesk@austindailyherald.com

Superlarks take it to Randoph in a sweep