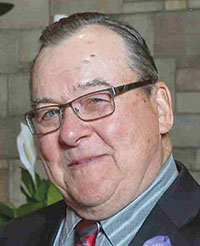 Don was born April 22, 1932, in Sioux City, Iowa, to George and Alice (Honrath) Igou. The family later moved to Salem, South Dakota, where he met the love of his life, Geneva Bies. On Jan. 22, 1952, he was united in marriage to Geneva at St. Mary’s Catholic Church in Salem. He was drafted that same year into the Korean War. Don farmed in South Dakota before he, Geneva, and their family moved to their farm in Dexter, where they made their home the last 60+ years. Don was a member of St. Augustine Catholic Church, Adams American Legion, Austin VFW, DAV and Eagles. He enjoyed spending time with his family, traveling, gardening, and was well known for his legendary storytelling and card skills. He was beloved by his family and all who knew him. He will be greatly missed.

A funeral Mass will be celebrated at 10 a.m. on Saturday, Sept. 21, 2019, at St. Augustine Catholic Church with Father James Steffes officiating. There will be a 4 p.m. wake service on Friday, Sept. 20, 2019, at Mayer Funeral Home, where friends may call from 4-7 p.m. Visitation will continue for one hour before the Mass on Saturday at the church. Interment will be in Calvary Cemetery with military rites by Adams American Legion Post 146. Memorials are preferred to the American Heart Association. Condolences may be left online at www.mayerfh.com.