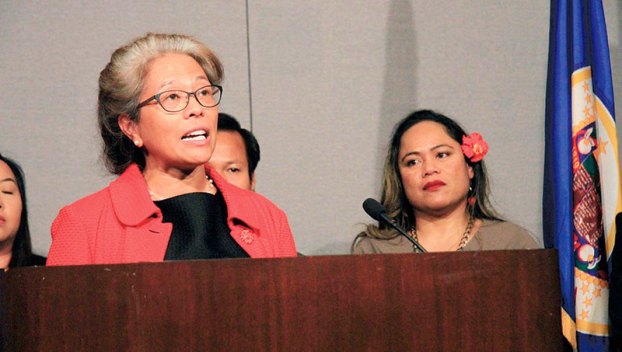 Joselyn Raymundo, founder of Rochester Home Infusion, plans to participate in the Asian and Pacific Islander Complete Count Committee to ensure an accurate count of people in Minnesota’s Asian communities ahead of the 2020 U.S. Census. Riham Feshir/MPR News

The Council on Asian Pacific Minnesotans has launched an effort to reach historically undercounted Asian communities ahead of the 2020 U.S. Census.

Asians across the nation are the least likely to be aware of the census and least likely to respond, according to the Council on Asian Pacific Minnesotans. On Wednesday, it became the first state ethnic council to form a Complete Count Committee.

“We are combating just basic education in terms of a lack of awareness that the census exists, that it is required by law to complete and also it is important,” said Anjuli Mishra Cameron, research director at the council.

The count committee will include more than 70 community leaders and organizations who will develop culturally responsive strategies to increase the response rate.

Asians in Minnesota represent 40 nations, including some of the fastest growing groups across the country. State officials say Hmong and Karen populations have doubled since the last census count. The 2020 census will determine federal funding and political representation. It’ll also help businesses and government entities decide where to allocate resources.

People of color, renters and children under 5 years old historically have been undercounted. Census officials say language constraints and lack of trust contribute to lower response rates, which is why they’ve pushed for robust partnership efforts.

Karen refugees began arriving in Minnesota in 2004 to escape political violence in Burma, also known as Myanmar. The majority have resettled over the last decade, which means some never participated in the U.S. Census and they may be reluctant to do so since the Burmese government used its census to identify and persecute the ethnic minority group.

“I remember hearing from my parents that the school I went to in Burma asked my parents to change all of our names in Burmese. That way we can be counted as Burmese instead of Karen,” said Eh Tah Khu, executive director of the Karen Organization of Minnesota. “And of course my parents refused to do that.”

Khu emphasized the importance of working with community organizations to establish trust and guide people through the process in the state.

Immigrant rights advocates say some of the hesitation to fill out the U.S. Census form could come from a heightened level of fear that immigrants have felt over the past few years. President Trump proposed to add a citizenship test to the 2020 census, but the question was blocked at the end of a legal battle.

However, fear among some immigrants who hold different immigration statuses still lingers, advocates say. The Complete Count Committee says it will ensure communities know that the 2020 census is not tied to immigration cases.

Bao Vang, president of the Hmong American Partnership, said the joint effort is an “urgency call” for all to find solutions and different strategies to minimize fear of the government, and overcome barriers that have led to an undercount in the past.

“Having a Census Bureau agent at the door does not get us the accurate count,” she said. “But partnering with community-based organizations or people from the community, churches and other groups, where there is that relationship, is going to achieve in the accuracy of the census count.”

The U.S. Census Bureau plans to hire 7,500 takers in Minnesota with an effort to recruit people of color from undercounted communities. Census forms are set to go out in March.