The No. 3 ranked LeRoy-Ostrander football team is off to its best start in 15 years. The Cardinal captains include, from left, Kaleb Janssen, Tanner Kasel, Riley Olson, Carter Johnson and Chase Johnson. Rocky Hulne/sports@austindailyherald.com

Cardinals paint the town red: LeRoy-Ostrander football team is off to its best start in 15 years

LEROY — When LeRoy-Ostrander grad Jace Bunne came back to his hometown this past summer, he saw a football team that he thought could be special.

Now he knows the Cardinals are special.

Bunne, who recently finished a four-year run on the Southwest Minnesota State football team in Marshall, spent a good portion for the summer running the Cardinals through some of his college drills and helping out in the weight room. Now that he’s back in school finishing his degree, Bunne has kept a close eye on the Cardinals, especially after they knocked off Grand Meadow, which won nine man state titles in 2013, 2014, 2015 and 2016 and Spring Grove, which won state nine man titles in 2017 and 2018.

“This team was dedicated throughout the whole summer on the field and in the weight room,” Bunne said. “I’ve been following their scores and keeping up with them. With a couple of wins like that, going to state isn’t out of the question. It’s great for the town.”

The Cardinals (3-0 overall) are currently ranked No. 3 in class nine man, but it was just four years ago when they didn’t even field a varsity team and the last time the LO had a winning record was in 2006. LO’s last state tournament appearance was in 2004.

The Cardinals are coming off a 2-7 overall season, but they’ve quickly proven that their summer workouts have paid dividends. 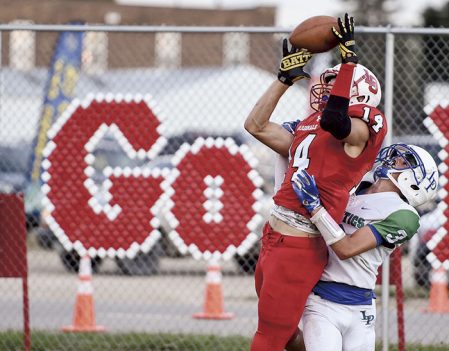 LeRoy-Ostrander’s Riley Olson pulls down a two-point conversion in the first quarter against Lyle-Pacelli Friday night in LeRoy. Eric Johnson/photodesk@austindailyherald.com

“I think we’re all a little surprised, but it’s nice to see our hard work has paid off,” LO senior lineman Kaleb Janssen said. “The seniors know it’s our final run, so we’re just trying to do the best we can do.”

The winning has grabbed the community by storm and the players have noticed. Senior lineman Tanner Kasel said it’s a perfect time to be a football player for the Cardinals.

“It’s a complete turnaround. Everybody’s supportive,” Kasel said. “You see a lot of stuff on facebook about the team, there are banners all around town and you see everybody out at Travel Lanes after the games. It’s great.”

The Cardinals have excelled on both sides of the ball as they are averaging 50 points per game and allowing just 18.3 points per game. The team had to make some big adjustments at quarterback when Trey Hungerholt graduated last year, but sophomore Chase Johnson and his brother Carter, a senior running back, have picked up the slack and then some.

“Friday nights are everything now. It’s going good,” Chase said. “All of my teammates believe in me and that helps a lot.”

LO head coach Trevor Carrier said his team has gained a ton of confidence in the past two weeks, but he is stressing for them to stay humble about their accomplishments and honest about the improvements they need to make.

“We’re not going to be brash and cocky about anything,” Carrier said. “We can’t focus on what we did or what’s next, we focus on now and Mabel-Canton is now. We don’t talk about anybody else. We’re honest when we watch the film and we look for things we can improve on.” 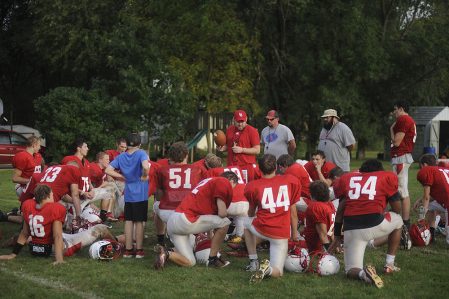 The Cardinals’ success on the football team has been embraced by entire school and the community itself.

LeRoy-Ostrander principal Aaron Hungerholt played a key role in building up the LO program as he started the youth football program and was a long-time head coach before stepping aside this year.

LO had suffered some key injuries over the past two seasons that held it back, but Hungerholt said he isn’t surprised by how well the team is playing this fall.

“This isn’t something that we’ve been doing over night. (Assistant coach) Dan Lowe and Trevor both played big roles for a long time,” Hungerholt said. “It’s had a great effect on the school and the town. The school has a new bounce to it and the kids are having a good time. I think it’s a great thing for the kids.”

“The school and community have been excited about the success of our football team,” Arsenault said. “The students are ecstatic with the team’s success and are very supportive.  The community has withstood difficult times and has a positive rallying point to recover with.  I am honored to become a part of this community and school.”