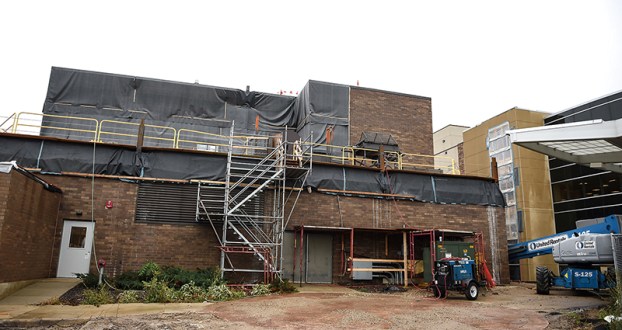 Work has started on the new addition to Mayo Clinic Health Systems — Austin with a target day for completion of 2020. Photos by Eric Johnson/photodesk@austindailyherald.com

Patients at Mayo Clinic Health System in Austin have been greeted by the sight of construction, but otherwise, it’s business as usual for the hospital.

The $11.2 million expansion project is currently in its first of six construction phases that will finish the transition of inpatient services from Mayo Clinic Health System in Albert Lea to Austin’s campus, with the completion of the entire project projected for late 2020.

“This is an exciting modernization and expansion project that will serve our patients, staff and communities for years to come,” said Mark Ciota M.D., CEO of Mayo Clinic Health System in Albert Lea and Austin in a previous story. “This expansion is the culmination of more than two years of analysis and planning to ensure the viability of our campuses and make the best use of our facilities and staff resources to serve our patients.” 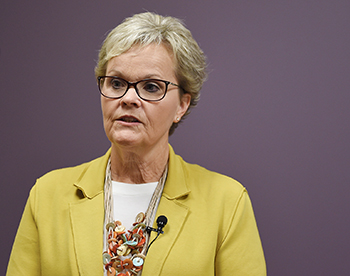 Tricia Dahl, operations administrator for Mayo Clinic, gives an update as to the construction of the hosptial’s addition.

Outside, a new link building is under construction that connects the main entrance of the medical center directly to the newly expanded units. Right now, patients and visitors need to walk through the hospital to get to the lobby elevators, according to Tricia Dahl, operations administrator for Mayo Clinic.

The link being built on the north face of the hospital adds about 5,000 square feet of usable space and provides access to the elevators in the front entrance, granting patients and guests easier access to the Family Birth Center and the medical and surgical unit.

The second and third floors at the hospital have also been under construction. The space on the second floor that was occupied by the inpatient Psychiatric Services Unit was relocated to a newly remodeled space on Albert Lea’s campus and will be the site of the modernized medical/surgical/pediatrics unit. Patient rooms on this floor will remain the same, Dahl mentioned.

By mid-2020, the construction staging in front of the hospital will be removed and placed in the back of the campus, and the handicapped parking area will be returned to its original location. Tiered landscaping viewable from the clinic’s lower area waiting area will have a ‘Me Too’ bronze family sculpture.

So far, the third floor has been completely gutted for the remodeling of the Family Birth Center and expanded operating rooms for cesarean sections and other surgical needs. This was originally where the Women’s Special Care Unit and step-down/telemetry unit was located. 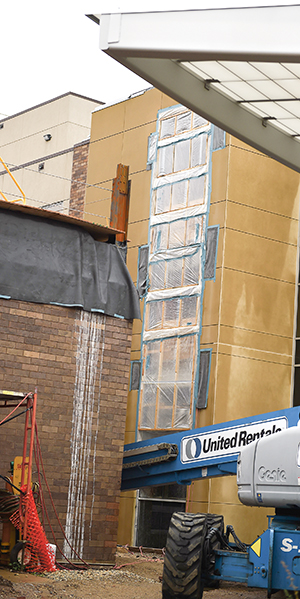 The area of the primary building masked off with plastic is the bridging point from the hospital to the addition when its completed.

Ten large labor and delivery rooms with private bathrooms are in the process of being renovated to accommodate mothers, babies and their families throughout the labor, delivery and recovery process and will be 58 percent larger than current patient rooms, Dahl noted. There will also be a newborn nursery, a larger waiting room, as well as a space for triage and a caesarean suite.

“The size of the rooms were a big part of this project,” Dahl said. “Once finished, it’ll be pleasing for mom and baby while providing a warm and calming environment…It’s very exciting as these renovations are taking place to help provide quality care.”

Although the labor and delivery services were to transition from Albert Lea to Austin in October 2020, the timeline changed because of “urgent staffing shortages,” according to a previous story. Those services will be operational this October with consolidation being finished on Oct. 31. Low patient numbers have also contributed to the transitioning of services.

Albert Lea has had 167 births (about one birth daily), while Austin experienced 225 births (a little more than one birth daily). Once consolidation is completed, Mayo may be able to pull in a couple more births from southeast Minnesota. About 30 percent of births in Freeborn County take place outside of the area, with patients going to Owatonna, Mason City, Iowa, and Olmsted Medical Center for care.

It was previously reported that staffing shortages were caused by an unexpected departure of a staff member as well as the challenges of external recruitment for employment. If Mayo Clinic hadn’t expedited the transition to this October, then the remaining obstetricians would have needed to be on call every other day at both campuses in Albert Lea and Austin.

This transition prompted outcry within Albert Lea, who have protested the clinic’s decision, and prompted the community to seek other healthcare providers to extend services that were moved to Austin. It was announced earlier this week that MercyOne North Iowa was selected by Albert Lea to build a clinic there in 2020.

Mayo Clinic has repeatedly stated that the health system will still continue to provide healthcare services in Albert Lea and that 95 percent of services can still be found within town.

The clinic also transferred the inpatient psychiatric unit to Albert Lea from Austin last year, with the addition of 16 private rooms, and brought together on-campus residential mental health and addiction programs, which allow medical and chemical issues to be treated in one place.

To help ensure Minnesotans have the best chance of surviving a crash, more than 300 law enforcement agencies will be... read more