An Austin woman with an arrest warrant for alleged check forgery made her first appearance on Monday in Mower County District Court. 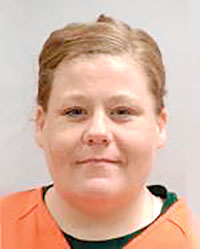 According to the court complaints, a man met with police on June 3 at the Mower County Law Enforcement Center regarding checks taken from his mailbox in the 1400 block of 18th Street Southwest. He said he went to see his daughter graduate college on May 24. While he was gone, another relative in Austin went to the residence and found mail belonging to him and his neighbors scattered at the residence.

The man’s mother said that a check she had sent in a graduation letter had been cashed, but the man had not received the letter. He told police he realized someone had stolen the check from his mailbox and showed them a copy of the check, which looked to have been forged. The check was in the sum of $300 and was payable to “Amanda Hanson.”

On June 20, a deputy met with another man who said mail had been stolen from his mailbox in the 27000 block of 570th Avenue. He said he had been away from May 22-26, but found his mailbox door open with no mail inside when he returned. He contacted the Postal Service regarding the matter and told the deputy he should have received a check for $379 from Wells Fargo Bank. He later learned Hanson has cashed the check and provided the deputy with a photocopy of the forged check.

On July 22, an APD detective investigating a mail theft case discovered that Hanson had forged more checks. While executing a search warrant, he located a check from Westfield Insurance made out the Hanson and learned she had an address in Albert Lea. The check had originally been made out to two individuals in the sum of $122.33, but the forged check was in the sum of $1,229.10. He also located several sheets of blank check paper and noticed several of the blank checks had printing, indicating someone was practicing forging checks. There were also several pieces of paper with Hanson’s name and address on them.

The detective spoke to one of the individuals the Westfield Insurance check had been issued and learned he had not received the check, which had been deposited into a “Capital One” bank account, with Hanson’s name on the back of the check, on July 16.  The detective learned the account belonged to Hanson and contacted Capital One’s Fraud Investigation Department, who said they were aware of suspicious activity on Hanson’s account.

The detective obtained a copy of Hanson’s bank statement and copies of checks that had been deposited into the account via mobile deposit. Included were the following:

• A check from the “BMO Harris” account of “Tealwood Enterprises” purportedly written to Hanson in the sum of $761.42;

• A check from the “Bank of the West” account of a man purportedly written to Hanson in the sum of $458; and

• A check from the “Wells Fargo” account of “Xcel Energy” made payable to “RSTOM Properties LLC,” with Hanson’s name handwritten above “RSTOM,” in the sum of $118.94.

A warrant was later issued for Hanson’s arrest.

Officers were dispatched at approximately 4:49 p.m. on Sunday to Kwik Trip at 1300 14th St. NW on a report that a woman was attempting to pass forged checks. Dispatch advised the woman had left Kwik Trip in a tan 2011 Chevy Malibu, which was spotted by an officer as it turned onto an eastbound Interstate 90 ramp.

The officer initiated a traffic stop and made contact with the driver, a male, and the passenger, Hanson. Hanson was advised to step out of the car and was placed under arrest. A search of her person revealed a Hy-Vee receipt for $67.59 paid with a check.

An officer saw a checkbook between the passenger seat and the center console. The driver gave permission to take the checkbook, which belonged to a 63-year-old woman in Freeborn County. Inside were carbon copies of checks for $93.81 and $67.59, both made out to Hy-Vee, and a Hy-Vee receipt for $73.81.

The officer spoke to a Kwik Trip employee, who said staff had been alerted about possible bad checks from the Freeborn County woman’s checking account. She said staff had been given a picture of Hanson and two checks she had recently used so they could be on the lookout if she came back to the store. When Hanson came in that day to buy food and lottery tickets, the employee saw the account as she was trying to pay for the items with one of the checks. She told Hanson she had to ask her manager if a check could be used to buy lottery tickets, but secretly called police.

The officer spoke to the assistant manager, who said he had been going through transactions that morning and noticed two checks, in the amount of $100 and $75, with different phone numbers. He pulled up surveillance footage and an employee recognized Hanson. He then did a Google search and learned Hanson had a history of check-related crimes, prompting him to alert other stores in town.

The officer alerted Hy-Vee about possible bad checks written at the store.

The driver of the Chevy Malibu denied going into Kwik Trip with Hanson and said he was not aware of how she had paid for the items.

While at the Mower County Jail, Hanson indicated she knew why the Kwik Trip employee called police. She said she did not know where the checkbook came from, but said it came from an acquaintance she refused to name because she was afraid of him. She said she asked him where the checkbook came from and was told it wasn’t from anything bad. She indicated she received the checkbook on Sept. 6 and was instructed to make high dollar purchases for food. She said she made four purchases, two at Hy-Vee and two at Kwik Trip, with the checks, claiming she gave the food to the acquaintance and kept the cigarettes she purchased with them.

An officer made contact with the checkbooks rightful owner, who said her house had been burglarized earlier in September and that several items, including checkbooks, had been taken.

Hanson will appear in court again on Sept. 19.