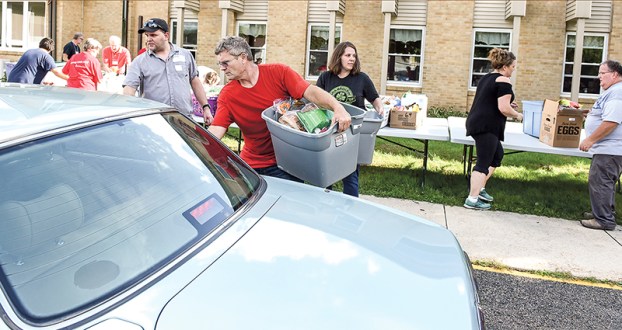 Walt Alms, one of around 200 volunteers, loads a basket full of food in to a vehicle during the first night of Ruby’s Pantry at Grace Lutheran Church Thursday night. Eric Johnson/photodesk@austindailyherald.com

It was nearly 45 minutes on Thursday, before Ruby’s Pantry, based at Grace Lutheran Church, was set to open and already the sanctuary of the church was filled and a line had formed far outside the door.

Before the food was even handed out the first distribution of Ruby’s Pantry was a success and certainly not a surprise to Ann Maxfield, site coordinator.

“Once the fire caught, we kept seeing it and hearing it,” Maxfield said of the time leading up to Thursday night.

Around 200 volunteers signed up to help food distribution at Ruby’s Pantry, an initiative that isn’t a food hand-out.

Instead, it’s an opportunity for people to take an active part in helping others, and helping themselves. 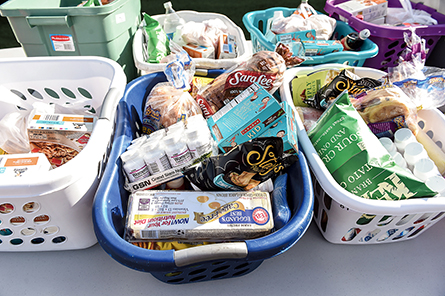 For $20 a share, people can get one basket of food containing between 18 and 20 items which includes one meat item, one dairy item and one bread item.

People can either buy shares for themselves or they can buy shares for other people. The idea is to help people stretch the food budget — neighbor helping neighbor.

“This is a $100 worth of food,” said Grace Lutheran Pastor Patrick Ziems. “Some of these people have never seen that much food in one place.” 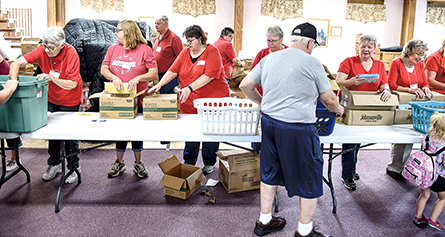 Volunteers hand out food Thursday night as the line begins to form during the first night of Ruby’s Pantry at Grace Lutheran Church. Eric Johnson/photodesk@austindailyherald.com

The idea first gained traction about sixth months ago during a Bible study. The church was looking for a way to reach out to the community.

Ziems worked with a Ruby’s Pantry while serving in Superior, Wisconsin, and suggested that it could work here. After visiting a Ruby’s Pantry in Albert Lea, the church moved forward.

“We were looking for a way our congregation could go outside our walls,” Maxfield said. “We were searching for what would work for us and it just caught fire.”

The beautiful part that really makes Ruby’s Pantry shine is that it isn’t just a Grace Lutheran project. Volunteers from all over Austin flocked to the opportunity to serve. It has been a community that has truly come together. 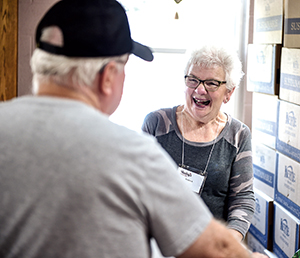 Monica Grimm laughes with a man picking up his food during the first night of Ruby’s Pantry at Grace Lutheran Church Thursday night. Eric Johnson/photodesk@austindailyherald.com

The other part that makes Ruby’s Pantry a success is the platform of sustainability it creates. From the $20, $18 goes to Ruby’s Pantry for things like warehousing, corporate donations, trucking items and other distribution costs. The $2 remaining goes straight back into Austin’s Ruby Pantry. When enough money is raised then that money will be distributed to help those in need.

“This is not a food hand-out,” Maxfield said. “This is an opportunity to take part.”

Chamber of Commerce seeking others for help organizing Freedom Fest; Will continue to organize Fourth of July Parade

The Austin Area Chamber of Commerce is hoping that other community organizations will get involved in planning Freedom Fest. In... read more