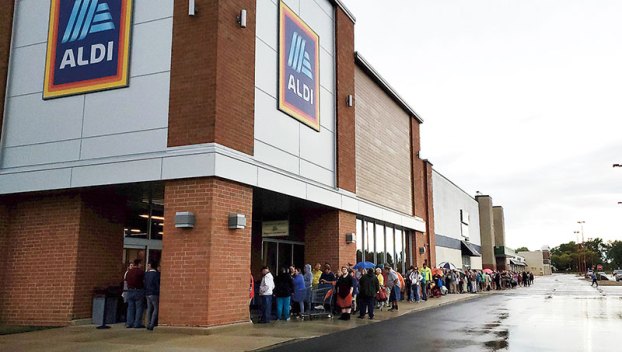 A line stretches clear down the length of stores from the front entrance of ALDI as people wait to head into the newly renovated ALDI location in Austin Wednesday morning. Photos by Eric Johnson/photodesk@austindailyherald.com

Judging by the line of people, stretching from the ALDI doors, one would think it was Black Friday.

Hundreds of people lined up outside of the recently reopened store Wednesday morning, waiting to get back into the store, which has been closed down for the past couple of months for an expansive remodel.

And judging from the early reactions, people are happy with the new look.

“Just to look at it, it looks good,” said John Zaharis, who along with his wife Cynithia, were among the first through the door. “The prices are low and they have much more quantity. And quality … they have always been good.” 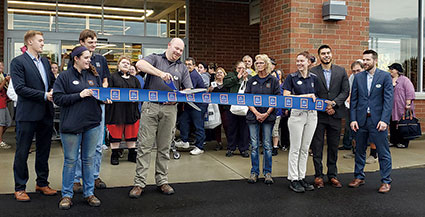 The remodel of the store is part of a $1.9 billion investment to remodel and expand more than 1,300 ALDI stores nationwide with a target for completion by the end of 2020.

Locally, the company has invested $6 million to update five stores in the Rochester, Austin and Mason City, Iowa area.

The update includes a devotion to fresh food and more items available for purchase. For instance, produce was one of the first things people saw when they walked in the store.

Linda Goude of Gordensville, Minnesota near the Iowa border, was the first customer through the doors Wednesday morning. 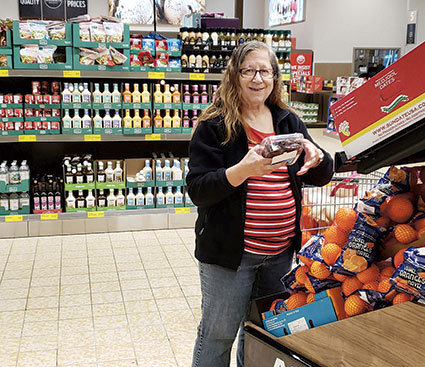 “The isles are wider and the lighting is better,” Goude said. “They have more produce up front. I shop for fresh produce.”

Another aspect is an extended offering of refrigerated goods.

Store Manager Jamie Churchill said the store received the notice of the remodel last year. Work started June 15 and in July the store was closed to do the major work of remodel.

Not only does the layout allow for more inventory, but it also opens the store up.

“The layout is different from the old store,” Churchill said. “It was designed to filter people through the lines. This is more open, spacious. It doesn’t feel as claustrophobic.”

John and Cynithia Zaharis were among the first to enter the newly renovated ALDI store in Austin Wednesday morning. Eric Johnson/photodesk@austindailyherald.com

ALDI Division Vice President Matt Lilla was on hand for the grand opening Wednesday morning and he explained that the entire $1.9 billion initiative of ALDI is to offer that feeling of fresh.

“We realized we can offer more of a product range,” Lilla said. “… expand the footprint and offer additional inventory.”

It certainly appeared that ALDI reached that goal and it didn’t escape Lilla either.

“It’s an overwhelming response from the community,” Lilla said. “We’re incredibly excited to invest in Austin and the community.”

Two commemorative plaques that honor military service and their families have been relocated to Honor Guard Park. The two plaques... read more