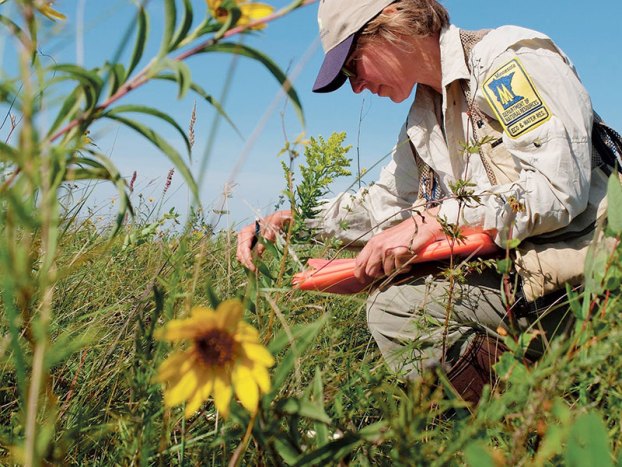 DNR project coordinator Erika Rowe identifies prairie plants near Twin Valley, Minn., on Aug. 24. It’s is one of hundreds of long-term monitoring sites being established across the state. Crews will return every six years to document changes. Dan Gunderson/MPR News

The wind whips Erika Rowe’s hair as she stands in a western Minnesota prairie and studies a GPS screen. She’s trying to determine the precise location for a small piece of this prairie which will become a monitoring site for scientists trying to understand better the ways Minnesota’s ecosystems are changing.

She’s project coordinator for the state’s new ecological monitoring network, hundreds of small plots in prairies and forests where researchers meticulously document every plant species. They hope to gather enough data — and return to each site enough times over the years — to be able to tell the story of Minnesota’s changing landscape, and predict where those changes might lead.

At this patch of prairie just outside Twin Valley, surrounded by wild sunflowers and short grasses, Rowe and three colleagues carefully measure a 45- by 20-meter plot, record its precise GPS coordinates and sink a metal stake in each corner of the rectangle. When researchers return in a few years, they’ll find the stakes with a metal detector.

“Our plan is to revisit these plots about every six to seven years,” Rowe said. “Hopefully I’ll still be here, but the crew will probably be different, so somebody has to be able to locate these exact spots again.”

The DNR began work on this project in 2016, with funds directed from the state Legislature. It’s the first long-term monitoring program of its kind in Minnesota. Since then, Rowe, the project coordinator, and her team have established about 150 monitoring plots, with a goal of eventually establishing 600. To minimize human bias, a computer program randomly chooses the locations for each monitoring site.

Once each site is established, Rowe and her team catalog every single plant species. Researchers hope that the volume of data gathered with each visit will help scientists and land managers understand how and why forests and prairies are changing.

“It’s everything from long-term climate change to increasing invasive species to changes in how we use the land,” said Hannah Texler, plant survey supervisor for the DNR’s Minnesota Biological Survey, who manages the overall project.

“It’s important for us to understand how all of those stressors are impacting vegetation so we can do a good job of managing and protecting our land.”

This crew of four — Rowe, botanist Nathan Dahlberg and two technicians — has been on the road, setting up monitoring sites, since late May. They’ll keep at it until mid-September.

Earlier this month, the team was working along Lake Superior’s North Shore. Last week, they were on the prairies of western Minnesota.

“It’s one of the treats of this project, getting to go to all of the community types across Minnesota,” said Dahlberg, as he worked to identify all of the prairie species in a square-meter grid. “Each week, I can be writing down a whole different list of species. It’s a lot of fun.”

MINNEAPOLIS — A Minnesota manufacturing plant with repeated pollution violations says it has shifted some of its operations to a... read more